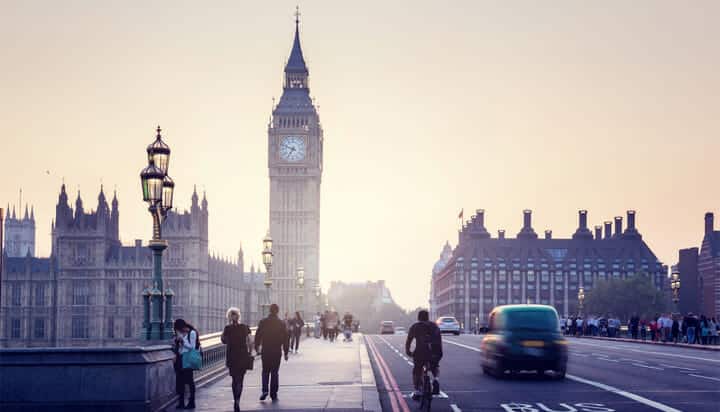 A two-tier economy could be emerging as Britain goes through an “energy revolution” with modern technologies like electric vehicles (EVs) and smart meters being adopted unevenly across the country.

The warning comes in a new report by Imperial College London and E4Tech, commissioned by the Drax Group, which finds London and Scotland are pulling ahead in the transition while the North of England and East Midlands lag furthest behind.

They break down the energy revolution into 20 metrics for the power, transport and building sectors, including numbers of EV charging points, uptake of EVs, smart meter rollout and energy efficiency measures, to provide a barometer of national and regional progress.

The report found the capital city is leading the progress, jointly with Scotland, because of its greenest transport system – a Londoner’s carbon footprint from transport is up to 2.5 times less than residents in other regions as public transport, walking and cycling are more dominant in the city.

It is also considered to be cheaper, on average, to own an electric car in London compared to other parts of the country, due to the average driver travelling shorter distances and the exemption of the congestion charge for EVs and homes in the capital are also said to be more energy efficient.

The report adds Scotland has seen a successful shift from fossil fuels to renewables and people in the country also benefit from a high proportion of EV charging points and relatively energy efficient housing.

By comparison, all of the regions lagging behind, including Wales, Yorkshire, the East Midlands and the north of England, suffer from “particularly low” Energy Performance Certificate (EPC) ratings and the cost of heating, together with lower average incomes in these areas mean fuel poverty rates are particularly high.

The report states: “As in other walks of life London stands apart, whilst less affluent regions in the north and elsewhere are falling behind on many measures. If the sole aim of the transition were to decarbonise energy, it might be rational to focus on wealthier metropolitan areas like London ahead of the rest of the country.

“However, if this begins to affect our way of life through the cost of energy, quality of services and air pollution, then such a strategy risks creating a two-track energy system that worsens regional inequality. To be effective, the UK’s energy transformation needs to be a force for good across society and across the UK, not just where it is most convenient.”

Progress in transforming Britain’s energy system is uneven and this report reveals marked differences between the regions.

Generally, more affluent regions have made significantly greater progress. The north of England is falling well short, with only London and Scotland coming close to being on track to meet their overall targets. This first step towards exposing the differences between the regions paints an instructive picture of Britain’s unequal progress.

Renewable power generation is distributed according to natural resources so England has much less low carbon power per person than Scotland and Wales. However, Scotland and Wales also have some of the lowest transmission capacities to neighbouring regions, holding back further development of renewables. In contrast with the general picture for most metrics, Wales and the North East have the highest implementation of smart meters in Britain and London the lowest.

The West Midlands and the East currently have the highest uptake of passenger EVs, London has the most electric buses, while the South East, northern regions of England and Scotland have the highest share of ultra-low emission HGVs. On an absolute basis, however, the south of England is leading in the deployment of plug-in electric vehicles, which is correlated to higher household incomes in these regions.

Energy efficiency in buildings is neglected across Britain and much lower than is justifiable. However, it is generally better in the south of England and Scotland and worse in the Midlands, northern England and Wales. The North East has done the most to fix low-efficiency houses but still has high fuel poverty rates due to income levels and remaining poor quality buildings.

Implications for individuals, businesses and society

Cost reductions in key technologies such as renewable generators and batteries show that the costs of transforming the energy system could be modest. Ultimately, moving to modern clean energy could result in the lowest bills, although any increased capital costs to consumers and businesses should be considered in the context of affordability.

Homes and companies in London and the South East spend less on energy relative to income. Those in Wales and the North East spend the most, so any changes to energy costs will make the greatest difference to the welfare and profits of homes and businesses in these areas. In transport, the total cost of owning EVs is on track to reach parity with conventional vehicles. However, the higher upfront purchase price of EVs poses a greater affordability barrier in less affluent regions. Scotland and

Wales have lowest EV affordability, the West Midlands and London the highest. If marked differences in uptake arise from this, Britain’s cities could see rising inequality due to the health effects of air pollution.

In industry, further electrification may be difficult without impacting on energy costs, unless measures are taken to level the playing field. The changing power mix is shifting employment patterns, with job losses in fossil fuels offset by gains in new industries, often in poorer remote areas. Electrification and automation often go hand in hand, and the South East, Midlands and north of England face the highest risk of job losses from automation.