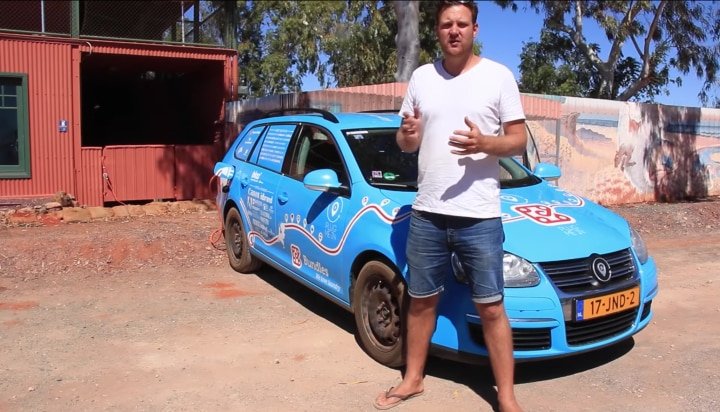 A Dutchman driving from Holland to Australia in an electric car without using any money has reached the 1,000-day milestone.

Wiebe Wakker started his electric road trip from Amsterdam to Sydney on the 15th of March 2016 – he is now in Brisbane and plans to complete the journey early in 2019.

He started the journey to showcase the possibilities of sustainable mobility – he depends on the generosity of people to offer him a meal, place to sleep or electricity to charge his car.

So far he has driven his retrofitted Volkswagen Golf Variant through Europe, the Middle-East, India and Southeast Asia. It has a range of 200 kilometres and has so far carried him through a total of 33 countries.

Wakker became the first ever person to cross, Turkey, Iran, India, Myanmar, Malaysia and Indonesia in a fully electric car and has broken the previous record for the ‘longest journey in a battery powered car.’ The previous record was 22,000 kilometres,  whereas Wakker has done 85,000 so far.

Queensland Minister for Transport and Main Roads Mark Bailey said: “Wakker is a trailblazing electric vehicle driver who inspires millions of people with his amazing project who now all see the possibilities of electric vehicles.”