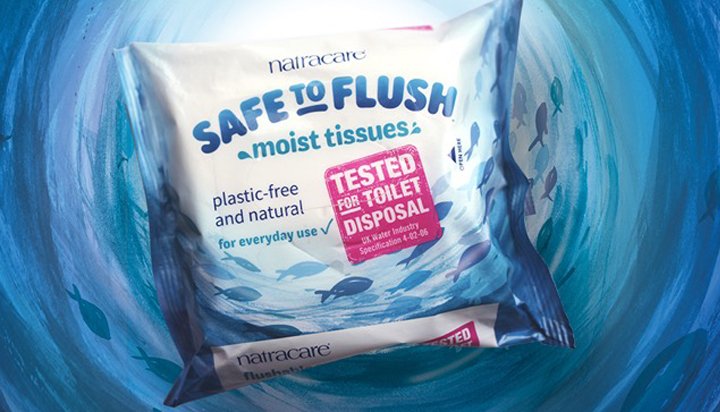 The first wet wipes in the UK granted official certification as “fine to flush” down the toilet have been unveiled.

The wipes, which are 100% plastic free, compostable and made with natural and organic ingredients, will have the ‘Fine to Flush’ symbol that was launched by the industry body last month.

Manufacturers can use the symbol after they pass the strict tests that check the extent of the breakup of the wipes in the drain and sewer system as well as any plastics and residuals that could contaminate rivers, estuaries and the sea.

The symbol informs consumers the product doesn’t contain plastic and won’t clog up sewers and contribute to fatbergs which cause blockages and sewage overflows.

Fatbergs are mainly caused by a build-up of wet wipes, fats, oils and grease into a solid mass – a 90-tonne fatberg, equivalent to the weight of around 13 African elephants, was found in a sewer in Liverpool recently, the biggest in North West England.

Susie Hewson, Natracare’s Founder and Director said: “For the longest time, big toilet paper brands have been pedalling products with hidden plastics that claim to be ‘flushable’. We hope Water UK’s new standard and our new organic flushable moist tissue will create more transparency – which will lead to less plastic pollution. The industry said it could never be achieved. We are pleased to have proved them totally wrong.”

Rae Stewart, Director at Water UK added: “It’s great to see the first wipe meeting the ‘Fine to Flush’ standard coming onto the market and I hope it’s the first of many, with people having a clear choice in future when they buy wipes.

“The ‘Fine to Flush’ symbol on packaging gives customers confidence that they won’t be helping to create these monstrous fatbergs which clog up sewers and cost the country so much money to deal with. But it’s important to remember that if it doesn’t say ‘Fine to Flush’, those wipes need to go in the bin.”