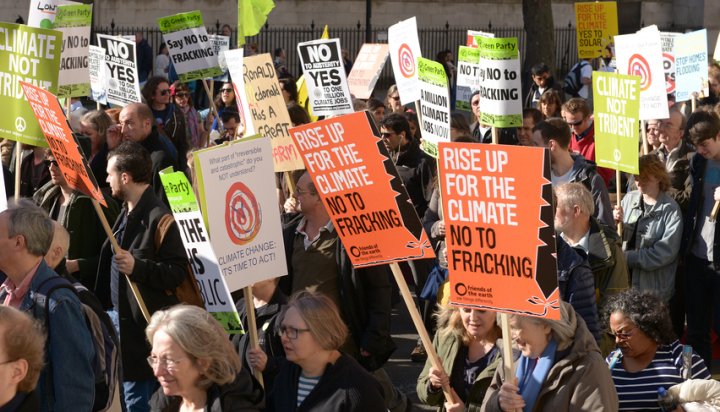 A fracking protest in the UK. Image: John Gomez/Shutterstock

The High Court has ruled the government’s new guidance on fracking as “unlawful”.

Campaign group Talk Fracking had launched a legal challenge against the government’s planning policy, which it argued had taken “out-of-date and flawed” scientific evidence for the new policy.

It added the government adopted some elements under the National Planning Policy Framework (NPPF), published in July 2018, “without first reviewing scientific data in a transparent manner”.

A judge found the government failed to consider the latest evidence and criticised the way the fracking public consultation was carried out as “flawed in its design and processes as to be unlawful”.

The judgement also suggested shale gas obtained from fracking might not be considered a low carbon source of fuel.

Mr Justice Dove said: “What appears clear on the evidence is that the material from Talk Fracking and in particular their scientific evidence as described in their consultation response, was never in fact considered relevant or taken into account, although…this material was relevant to the decision which was advertised, which included the substance and merits of the policy.

“On this basis it clearly was obviously material on the basis that it was capable of having a direct bearing upon a key element of the evidence base for the proposed policy and its relationship to climate change effects.”

He said: “I’m very pleased that the Court has confirmed that the government has behaved irresponsibly and recklessly with our democratic rulebook. Their consultation was a farce. Their Written Ministerial Statement claim that fracking is a bridge to low carbon economy is not based on scientific evidence.

“It is also clear, with guidance from the Court, that climate change objections to fracking must be considered at a local planning level.”

The judge added he will allow Talk Fracking and the government time to consider the implications of the ruling and to make further submissions.

A spokesperson from the Ministry of Housing, Communities and Local Government said: “We note the judgment in the case brought by Talk Fracking and will now consider our next steps.”