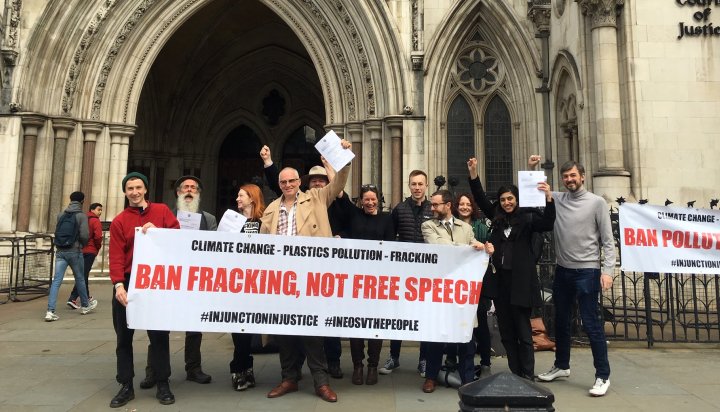 Image: Friends of the Earth

The Court of Appeal has judged an anti-protest injunction granted to oil and gas giant INEOS by the High Court was unlawful.

Today a judge has ordered extensive changes to the injunction, including the complete removal of two key elements – ‘persons unknown unlawfully causing loss to INEOS by combining together and protesting against INEOS’ suppliers’, as well as ‘persons unknown protesting on the public highway, using tactics such as slow walking’.

Prohibitions against ‘persons unknown trespassing on INEOS’ land and interfering with private rights of way’ have been maintained but INEOS must now return to court so these remaining elements can be tested against the Human Rights Act to see if they should still stand or be changed.

​”The outcome of this case serves to underline the importance of the Human Rights Act 1998 as a safeguard for fundamental freedoms like free speech and the right to protest. These rights are the life blood of our democracy.”

The High Court has ruled the government’s new guidance on fracking as “unlawful”.

Tom Pickering, INEOS Shale Chief Operations Officer, said: “We will always do all we can to protect our colleagues, suppliers and peaceful, law-abiding local people.

“We respect peaceful protest, but we must stand up to the militants who game the legal system with intimidation and mob rule. We stand for jobs and opportunity. They stand for anarchy in the UK.”