Greenpeace activists shut down BP offices ahead of AGM 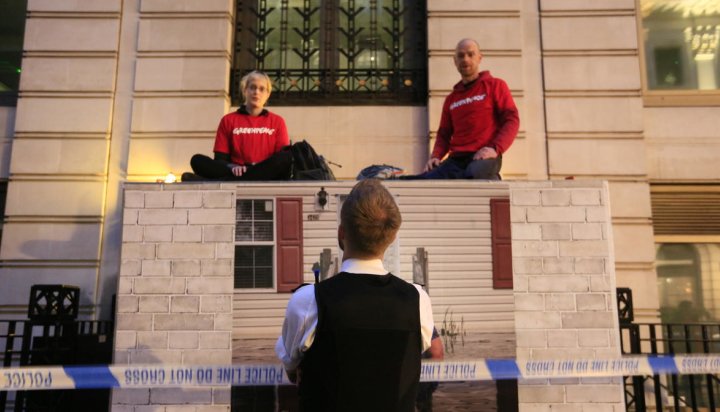 Greenpeace activists have shut down BP’s UK head offices in a protest against ongoing oil and gas exploration.

At 3am this morning in St James’ Square, London, the campaigners locked themselves in heavy toughened containers placed in front of the site’s main entrances – they say this will prevent staff from entering the premises.

Climbers have also descended from the roof and stuck the words “CLIMATE EMERGENCY” across the front of the building.

The green group demands BP “immediately ends all exploration for new oil and gas” and switches to 100% renewable energy investments.

The activists say if this is not possible, the energy giant should close down its operations and go out of business.

The move comes on the eve of BP’s AGM and campaigners claim they have enough food and water to keep the office closed all week for maximum disruption.

Paul Morozzo, one of the Greenpeace activists in the container, said: “We’re shutting down BP’s headquarters because business as usual is just not an option.

“BP is fuelling a climate emergency that threatens millions of lives and the future of the living world. The science is clear – we must stop searching for new oil and gas if we want a liveable planet. BP must clean up or clear out.”

A BP spokesperson told ELN: “We welcome discussion, debate, even peaceful protest on the important matter of how we must all work together to address the climate challenge but impeding safe entry and exit from an office building in this way is dangerous and clearly a matter for the police to resolve as swiftly as possible.”