Coordinated by the Ende Gelände alliance, activists crossed fields and broke through a police cordon to get into the Garzweiler mine in North-Rhine Westphalia 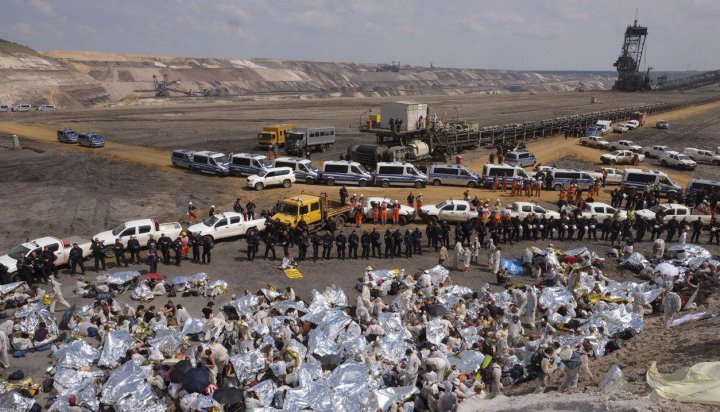 Hundreds of activists stormed an open-pit coal mine in Germany on Saturday as part of a new wave of climate change protests across the country.

Coordinated by the Ende Gelände alliance, activists crossed fields and broke through a police cordon to get into the Garzweiler mine in North-Rhine Westphalia, in order to draw attention to ongoing fossil fuel use despite Germany’s vow to go carbon-neutral by 2050.

Ende Gelände claims protestors entered a standoff with police inside the mine and resisted attempts by police to clear the site.

Authorities say it took until Sunday morning to completely clear the area of protesters, who mine-owner RWE accuses of trespassing and arson.

Activists said the occupation forms part of a week-long series of actions designed to end Europe’s dependency on fossil fuels – a separate team of activists from the organisation blockaded railway tracks leading to the coal-fired Neurath power station, spending the night on the tracks to keep any trains from using the lines.

Ende Gelände spokesperson Sina Reisch said: “This is not only about coal power. This is about changing a destructive system that is based on the quest for infinite economic growth and exploitation. We are fighting for a future in which people count more than profits.”

RWE said: “The group has no sympathy for the 1,300 “activists” who illegally entered the Garzweiler opencast mine and occupied the tracks on the coal supply lines.

“In addition, there were several arson attacks on a pump station, switch cabinets and vehicles. According to the police, a number of their officers were injured during the illegal actions.”