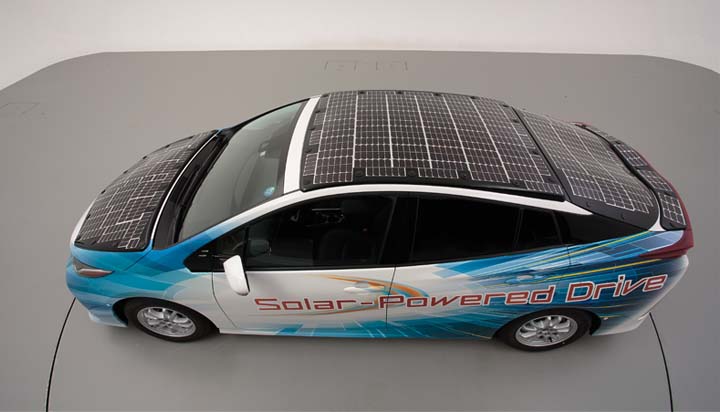 Toyota has announced it is to start trialling solar-powered cars on public roads this month.

Solar battery cells with “high efficiencies” previously developed by electronics giant Sharp to create an onboard solar panel for the New Energy and Industrial Technology Development Organisation (NEDO) have been installed on the roof, bonnet and tailgate of Toyota’s Prius Plug-In Hybrid.

The car manufacturer said the high efficiency and expansion of its onboard area enabled it to achieve a power generation output of around 860W – with the figure 4.8 times higher than the production model.

The demonstration car also consists of a system that charges the driving battery while the vehicle is parked as well as when it is being driven.

Toyota plans to conduct the trials in various driving conditions in Toyota City, Aichi Prefecture, Tokyo and other areas of Japan.

Data, including the solar battery panel’s power generation and the amount the drive battery is charged, will be gathered and verified and used in the development of an on-board solar recharging system.

Toyota said in a statement: “The PV-powered Vehicle Strategy Committee, sponsored by NEDO and others, will evaluate the benefits based on improvements in CO2 emissions reductions and convenience, such as the number of times a vehicle needs recharging.

“The goal is to contribute to the creation of a new solar battery panel market, including the transport sector and find new solutions for energy and environmental issues.”

Here’s a film when ELN has a first look at a prototype of a solar-powered Prius at the Paris Motor Show.