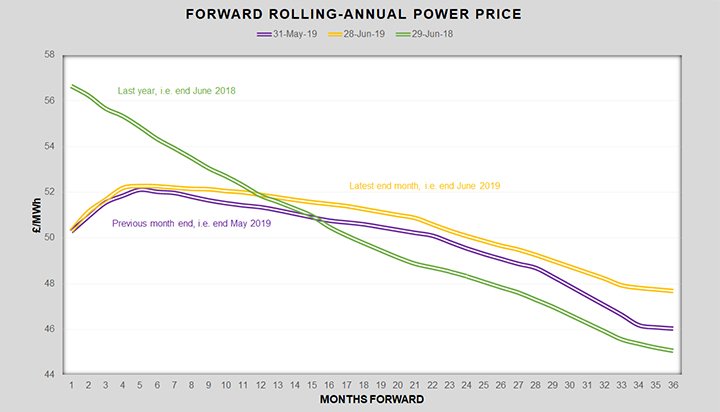 Whereas UK energy prices ended pretty much where they started June 2018, during the month they were quite jumpy. Temperatures were generally well below season norm, though we did experience one very hot spell towards the end of the month. June 2019 will also be remembered for the longest continuous period without coal generation since 1882!

The forward curves for rolling annual prices maintained their contango structure at the prompt end of the curve and further forward both gas and power are looking increasingly to follow suit; gas definitely has a more bearish sentiment though power may not be far behind.

Gas:
Gas prices dropped very slightly over the month allowing nearby months to roll down the curve, albeit the forward structure of the rolling annual prices hardly changed. Bearing in mind temperatures in June were much lower than seasonally normal for most of June (even taking account of the high temperature towards the end of the month) and LNG send-out was low, there was an expectation that EU gas storage levels would have dropped. However, gas storage has continued to net grow; historically, the current storage levels have been followed by weak winter prices. So, unless winter 2019 starts early, or is extremely colder than normal, this weakness could well follow through to next summer. Of course, much can happen over the next few months though market signals currently indicate continued weakness should be anticipated. Brexit related weakening of £/€, will provide upward pressure on prices and political issues, impacting oil too, could provide the catalyst for a change in sentiment, however, indications are that gas prices will be under pressure for the foreseeable future. 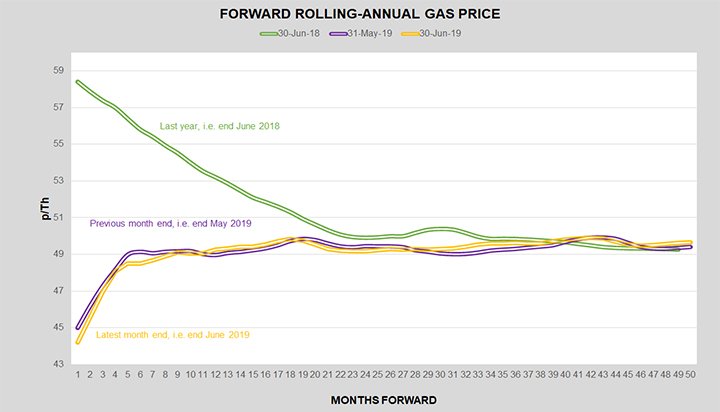 Movements in UK power prices were generally consistent with the gas, though forward prices were a bit stronger, gradually reducing the backwardation evident beyond summer 21. The forward curve for rolling annual prices was generally a little higher for forward years, compared to last month, though prompt prices did drop off slightly – whereas this is an indication of weakness to come for this winter, further forward the market is still uncertain and looks in the balance. Nevertheless, Power is close to tipping fully in to contango and if it does the opportunity to benefit from the forward backwardation will go, though that should play in to the hands of flexible buyers. Let’s see how things develop?

Wind power production is likely to drop during most of July, though naturally solar production will pick up. We should also expect to see further ‘no-coal’ days and the possibility of yet another record for continuous no-coal generation in UK.

Oil:
Oil prices moved up during June, primarily driven by an escalation in tension with Iran – there have been a number of incidents in the Arabian Gulf, disrupting oil shipments. OPEC also agreed with Russia to maintain their production discipline. Nevertheless, Brent crude oil prices are about $10/bbl lower than this time last year, reflecting a better supply position overall. However, despite this, the market will become increasingly nervous about the political situation in the Middle East and, therefore, the likelihood of a risk premium developing for oil is high, pushing prices further up. How this will impact UK energy prices is not clear yet, but it does give us something to watch.

Over the next few months the number of contract renewals increase, and many non-flexible buyers must consider whether to fix in now (early) or wait until closer to renewal date. Of course, non-energy costs have risen significantly over the last few years and will continue to do so year on year. While nothing can really be done about these, the question of whether to fix early or not will be relevant from a wholesale energy price perspective. While fixing prices early can help budget certainty, if that is truly important, however, fixing the energy price now or waiting a few months is essentially a punt on the market – do you think it will go up or down? Nobody knows for sure though the trend does look weaker overall, and we are still above (well above for power) the past 5-year average for annual contracts.

So, the fixed-price contract trade-off is: wait for probably lower prices or aim to beat the rush? The relatively large number of buyers will inevitably give a perception of increased demand, albeit it is really just a need to contract rather than a physical supply/demand fundamental. Nevertheless, it is a real issue because it ramps up the market risk for suppliers who then need to manage their own risk levels, adding further support to the market. As a fixed-price buyer, you should discuss this situation with your Pulse account manager, to decide what is the best approach for you, before making a commitment on fixing your contract.

With regard to flexible contract buyers, especially for those that enter these contracts well in advance of first delivery, they may already have some cover bought last year when market signals were very bullish going in to winter. However, the current contango for the prompt seasons, is now where the flexible buyers start to really benefit as buyers can hold off, taking advantage of the prompt prices rolling off at lower prices, while also taking advantage of the trend.