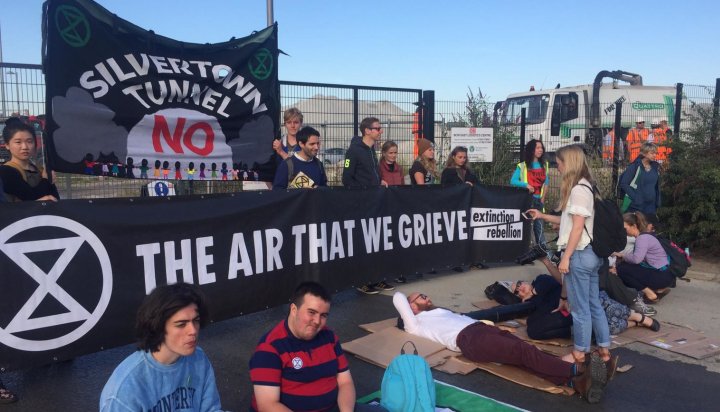 Extinction Rebellion protesters have blocked the entrance to a concrete factory in Bow, East London.

The group, which has launched its ‘Summer Uprising’ this week, claims around 50 people are involved in the non-violent disruption.

They have chained themselves to the gates of the site and a number have locked themselves to each other to stop access to the facility – as a result of not being able to get in, the company’s vehicles have become backed up on the road outside.

The activists are protesting the environmental impacts of concrete production, which is highly carbon-intensive, as well as the use of the material in the construction of the Silvertown Tunnel toll road, which they believe will make a signficant contribution to worsening air pollution.

A spokesperson from London Concrete said: “We confirm there are currently peaceful protests taking place outside of our London Concrete premises in Bow, East London and we are cooperating with authorities on this matter.

“We are cognisant of the carbon footprint of cement and concrete and we are at the forefront of efforts to mitigate climate change.”

London Mayor Sadiq Khan has announced plans for the biggest ever car-free day this September to help tackle air pollution in the capital.