The Beatrice Offshore Wind Farm will generate enough electricity to power around 450,000 homes every year 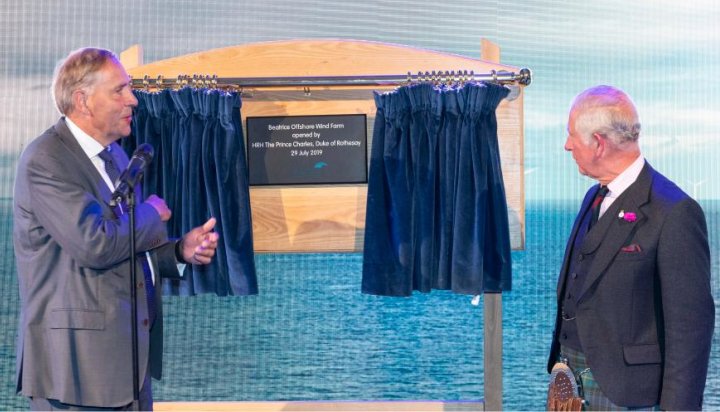 The largest offshore wind farm in Scotland with a capacity of 588MW has officially been opened by Prince Charles today.

Located 13 kilometres off the coast of Caithness, the Beatrice Offshore Wind Farm consists of 84 turbines, which will generate enough electricity to power around 450,000 homes every year.

The wind farm – the fourth largest in the world – will also help save around eight million tonnes of carbon emissions over its expected 25-year lifetime operation.

The £2.5 million project is the largest ever single private investment in Scotland and has been developed by SSE Renewables (40%), Copenhagen Infrastructure Partners (35%) and Red Rock Power Limited (25%).

“We’re incredibly proud it’s been delivered on time and under budget, even when dealing with the challenges the North Sea and deep waters bring. We’re especially proud of the significant positive impact Beatrice has already made to the communities of Wick and Caithness and which will last for decades to come.

“Most importantly, Beatrice will save around 8m tonnes of harmful carbon emissions over its 25-year lifetime operation, making one of the most significant contributions across the UK in combating climate change and meeting our net zero ambitions.”

UK Government Business Minister Lord Duncan added: “Wind energy provided a record-breaking 17% of the UK’s electricity last year, an increase supported by sustained government investment which is enabling the sector to grow, now contributing £2.4bn to the UK economy, while driving down costs.

“Beatrice will support nearly 400 jobs in Scotland and today’s grand opening reinforces our world-leading credentials in seizing the economic opportunities of the global shift to a greener, cleaner future.”