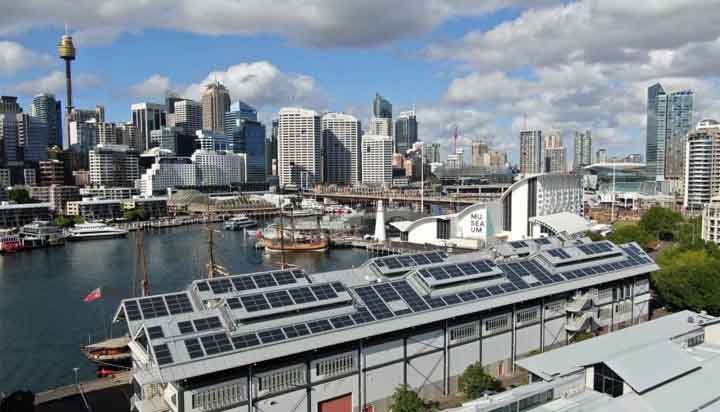 The Australian National Maritime Museum has installed a lightweight and flexible solar system claimed to be the largest of its kind in the country.

The 235kW array, which consists of 812 solar panels, have been fitted on the roof of the Wharf 7 Maritime Heritage Centre building in Darling Harbour, which due to its weight constraints and heritage status could not use conventional solar panels.

Solar firm Energus developed the eArche technology, a glass-free, lightweight solar PV panel, made from a polymer composite material, that can be fitted on any surface, including curved surfaces.

It is said to be around 70% lighter than conventional solar panels and is expected to help the museum reduce its electricity consumption by around 25%.

The technology – supported by the Australian Renewable Energy Agency (ARENA) by providing $6.6m (£3.6m) to Energus’ parent company SunMan Energy – can also be fitted to roofs with weight constraints while still having the same capacity for generation.

Kevin Sumption, Maritime Museum Director and CEO said the museum had been exploring installing solar panels to Wharf 7 for several years but found conventional solar panels were too heavy and rigid.

He added: “We came across a unique glass-free solar panel from Sunman. The 5.5kg lightweight panels could overcome the building’s structural challenges and also have the same power output as 20kg conventional panels.”