The protestors aim to highlight what they claim is the “conscious, cynical inaction of the government” in allowing the controversial method of fossil fuel extraction to go ahead 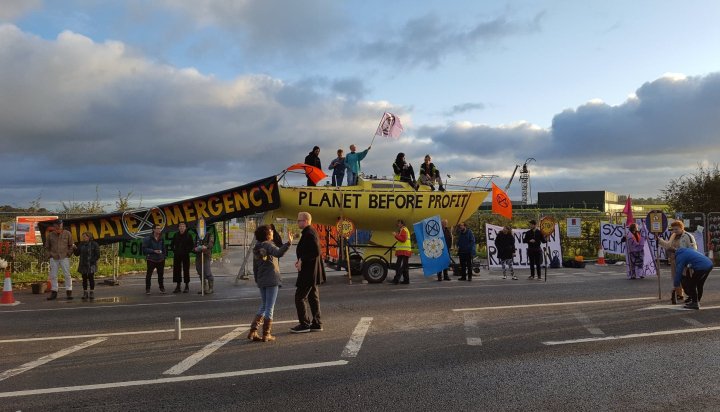 As part of the action, they have towed a yellow boat into the entrance of the facility near Blackpool, Lancashire, blocking traffic from coming in or out.

They aim to highlight the role that fracking plays in contributing to climate change and environmental pollution, as well as what they claim is the “conscious, cynical inaction of the government” in allowing the method of fossil fuel extraction to take place in the UK.

The protestors argue fracking threatens the cleanliness of air and water, as well as human health, land and property, due to recent tremors linked to extraction.

They have called on the UK Government to accelerate the move to net zero by moving the national target forward to 2025.

A spokesperson from Extinction Rebellion said: “Climate change is a burgeoning catastrophe. We know to prevent this, we must leave more than 80% of existing oil, gas and coal reserves in the ground.

“Yet this government is determined to find and exploit new reserves, supporting the likes of Cuadrilla in their attempt to open up a new gas field spanning the North of England.”

A spokesperson for Cuadrilla announced: “We are aware of an ongoing protest outside our shale gas exploration site in Preston New Road, Lancashire. This is not impacting on operations.

“We have no objection to peaceful, law abiding protest whilst recognising that our neighbours, motorists using the busy road and our staff and contractors should also be able to go about their business without disruption, inconvenience or intimidation.”