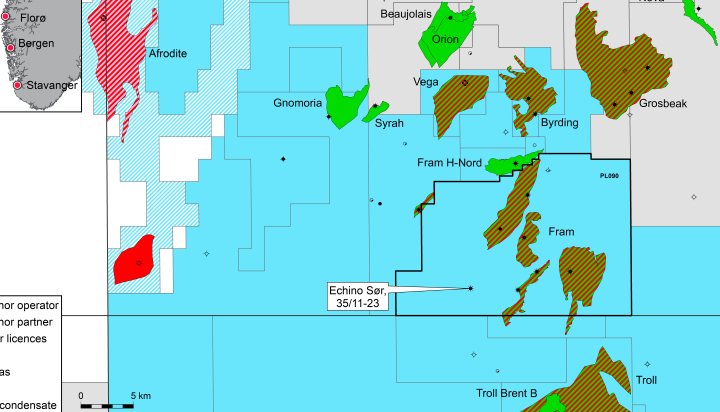 Norwegian energy giant Equinor and its partners have found oil and gas of up to 100 million barrels in the North Sea.

Recoverable resources at the Echino South prospect near the Fram field are estimated at between six and 16 million standard cubic metres of oil equivalent, corresponding to between 38 to 100 million barrels of oil equivalent.

Nick Ashton, Equinor’s Senior Vice President for Exploration in Norway and the UK said: “We are making one of this year’s biggest discoveries in the most mature area of the Norwegian continental shelf (NCS), not far from the Troll field. This demonstrates the opportunities that still exist for value creation and revenue from this industry.

“After more than 50 years of geological surveys on the NCS, we are still learning something new and finding hydrocarbons where we previously thought there were none. By utilising existing infrastructure, these resources may be recovered at good profitability and with low CO2 intensity.”

The licensees in production licence 090 are Equinor Energy AS (45%), ExxonMobil Exploration and Production Norway AS (25%), Idemitsu Petroleum Norge AS (15%) and Neptune Energy Norge AS (15%).