The party claims to be the only party with a “radical, credible and detailed plan” to tackle the climate emergency as soon as possible 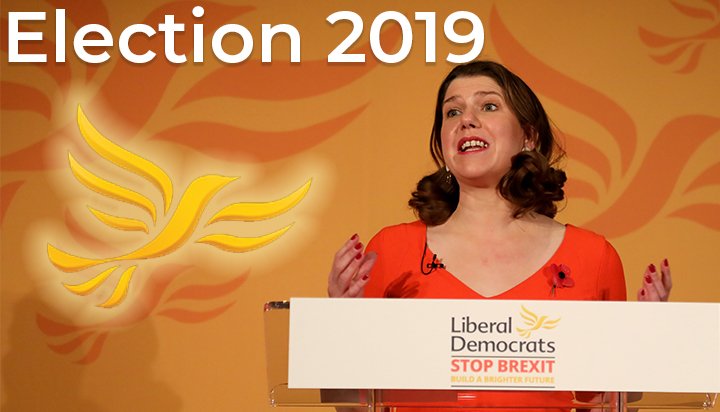 This week we will be highlighting the energy and environmental promises from the manifestos of the major parties, vying for your vote on December 12th. We start today with Jo Swinson’s Liberal Democrats…

The Liberal Democrats have vowed to take urgent action to save the planet and tackle climate change if they win the upcoming general election.

The party claims to be the only party with a “radical, credible and detailed plan” to tackle the climate emergency as soon as possible.

It said: “We are the last generation that can stop irreversible climate change. We’ve already seen how floods and wildfires are becoming an ever more regular occurrence in our country.

“And, though we should be proud to be the first country to declare a climate emergency, we cannot ignore the fact that the government has done little else since then. In the meantime, it’s been young people who have consistently put the climate crisis back on the agenda with their inspirational climate strikes.”

It will prioritise implementing an emergency programme to insulate all of Britain’s homes by 2030, cutting emissions and fuel bills and ending fuel poverty.

The party also promises to invest in renewable power so that at least 80% of UK electricity is generated from renewables by 2030, ban fracking for good, protect nature and the countryside by tackling biodiversity loss and planting 60 million trees a year and invest in public transport and clean mobility technologies.

It would require all companies registered in the UK and listed on UK stock exchanges to set green targets, regulate financial services firms to encourage green investments and create new powers for regulators to act if banks and other investors are not managing climate risks properly.

Within government, it plans to establish a Department for Climate Change and Natural Resources, require departments to account for their own contribution towards meeting climate targets and set up Citizens’ Climate Assemblies to engage the public.

They would also accelerate the deployment of renewable power by providing more funding, removing restrictions on solar and wind and building more interconnectors to guarantee security of supply – the party also promises to expand community and decentralised energy schemes, support councils to develop local electricity generation and require all new homes to be fitted with solar panels.

On a domestic basis, the party pledges to cut energy bills, end fuel poverty by 2025 and reduce emissions from buildings, including by providing free retrofits for low-income homes and piloting a new subsidised Energy-Saving Homes scheme.

It would require all new homes and non-domestic buildings to be built to a zero-carbon standard by 2021, rising to a more ambitious standard by 2025.

Cleaning up business and industry

Turning its attention towards business and industry, the manifesto promises to reduce emissions from industrial processes by supporting carbon capture and storage technologies, as well as new low carbon processes for cement and steel production.

It would ban non-recyclable single-use plastics and replace them with affordable alternatives, aiming for their complete elimination within three years, as a first step towards ending the ‘throwaway society’ culture and an ambition to end plastic waste exports by 2030.

A Nature Act would be used to help restore the natural environment through setting legally binding near-term and long-term targets for improving water, air, soil and biodiversity, supported by funding streams of at least £18 billion over five years.

The manifesto pledges to invest in public transport, buses, trams and railways to enable people to travel more easily while reducing their impact on the environment. and accelerate the transition to ultra-low-emission cars, buses and trains through taxation, subsidy and regulation.

It aims to ensure that by 2030, every new car and small van sold is electric, while a new Clean Air Act, enforced by a new Air Quality Agency, would enshrine the legal right to unpolluted air for all citizens.