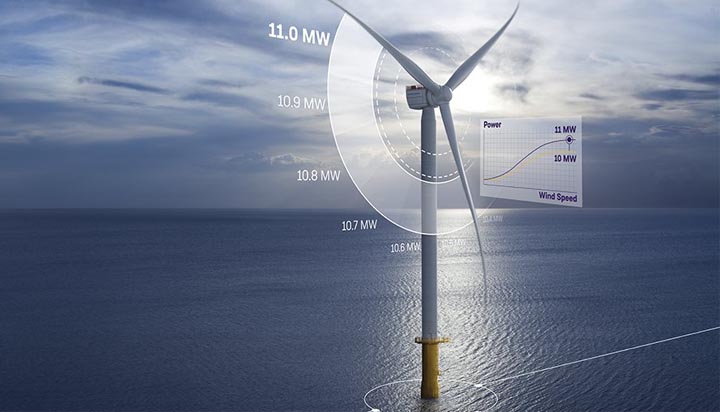 Using ‘Wake Adapt’, SGRE can adjust the heading of individual offshore wind turbines, directing the wind which flows off the individual machine in a different direction than what normally occurs.

The “wake effect” occurs when rows in a wind farm are closely aligned with the angle of the incoming wind. The front turbines block the in-flow and downstream turbines are affected by more turbulent, less powerful wind, resulting in reduced energy production.

The new technology, which can be remotely activated, helps overcome this by turning the rotors slightly out of the wind, reflecting the wake away from downstream turbines.

This redistributes the production across the row of turbines, reducing wake-induced production losses by up to 10%, which results in an increase of the annual production from a wind farm by up to 1%.

SGRE says the software solution can be customised to site conditions and can potentially be retrofitted on existing Siemens Gamesa offshore wind turbines.

Morten Pilgaard Rasmussen, Head of Offshore Technology at Siemens Gamesa said: “The Wake Adapt feature is about proactive problem-solving. Instead of letting the wind and wake fully dictate how much energy we can capture, we safely direct the wake – and its unfavourable effects – away from our machines across the entire power plant.