The buses will run on the M3 route, connecting communities in Milton and Springburn with Stobhill Hospital and the city centre 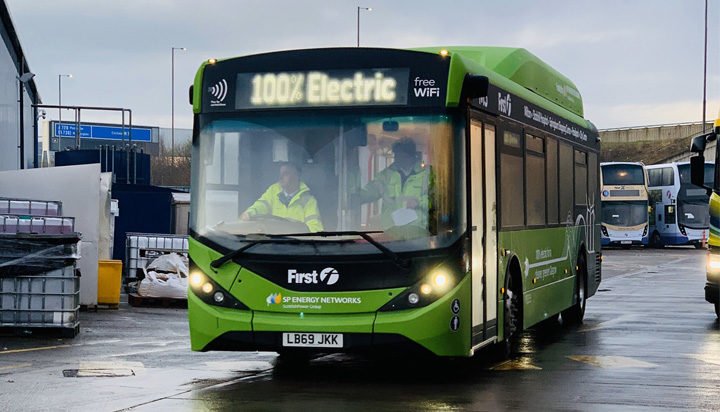 Electric buses are being rolled out in Glasgow on a commercial route for the first time since the 1960s.

Bus operator First Glasgow is launching two all-electric buses, which will run on the M3 route, connecting communities in Milton and Springburn with Stobhill Hospital and the city centre.

They are being funded under SP Energy Networks’ £20 million Green Economy Fund, which will also support the introduction of 22 electric vehicle (EV) charging points in First Glasgow’s Caledonia Depot, allowing more electric buses to be introduced in the future.

First Glasgow has invested more than £31 million over the last two years, with the introduction of 150 new ultra-low emission vehicles for Greater Glasgow, while retrofitting an additional 49 mid-life vehicles to speed up the switch to low emission standards.

Andrew Jarvis, Managing Director for First Glasgow, said: “Every customer journey on the route will save around 2kg of CO2 compared with driving on your own in an average car, making bus the best choice in reducing the impact on the planet.

“As a business, one of our main goals is to make buses part of the solution when it comes to improving air quality in the city. We’ve already invested £31 million in the last two years. By working with Glasgow City Council and Transport Scotland, we plan to make great strides forward in doing our bit to improve the city’s air quality and making Glasgow a cleaner and greener place to live and work.”

The project support’s Glasgow’s target of net zero emissions by 2030 and the introduction of a low emission zone in the city centre.

First Minister Nicola Sturgeon said: “Scotland was one of the first countries to acknowledge that we are facing a global climate emergency and we have legislated for the most ambitious carbon reduction target of any country in the world.

“A key part of our plans is encouraging greater use of public transport as well as phasing out petrol and diesel vehicles. It’s so great to see First an d SP Energy Networks playing their part in helping us to achieve our goal of net zero carbon emissions by 2045.”