Despite the re-affirmation of plans to plant more than 30,000 of hectares every year and increase spending on conservation, green groups have voiced disappointment with the Prime Minister’s speech 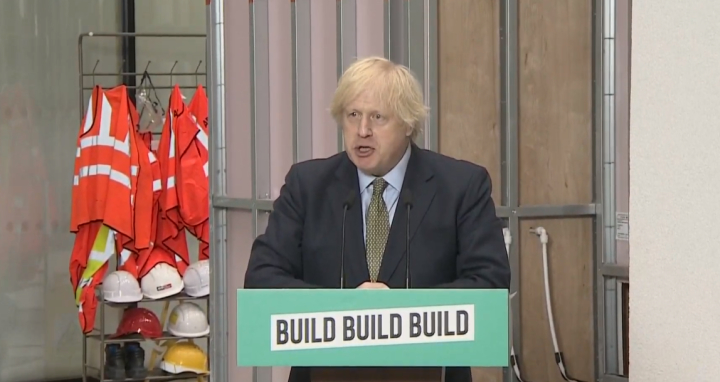 Boris Johnson has promised the government will “build build build” to help the UK recover from the coronavirus crisis.

Speaking in Dudley in the West Midlands, the Prime Minister has today pledged to “tackle this country’s great unresolved challenges” and set out plans to accelerate £5 billion worth of new infrastructure projects as part of a “New Deal”.

He promised to “build better and build greener but also build faster”, as well as “scythe through red tape” to get projects done as quickly as possible.

Reaffirming plans to plant more than 30,000 of hectares of trees every year, in addition to unleashing £40 million of spending on local conservation projects. Mr. Johnson committed to backing the vision of the UK becoming a global leader in developing batteries for electric vehicles, as well as stating the government would step up investments in “high-risk, high-reward” projects to safeguard the future of the economy and tackle climate change.

He said the UK would lead in markets and technologies such as net zero planes and long-term solutions to global warming such as solar, wind, nuclear, hydrogen and carbon capture and storage.

The Prime Minister said: “As part of our mission to reach net zero carbon dioxide emissions by 2050, we should set ourselves the goal now of producing the world’s first zero-emission long-haul passenger plane – jet zero.”

Despite these pledges, and others to put jobs and infrastructure at the centre of the government’s economic growth plans, environmentalists have reacted with disappointment to the announcement, noting that Mr. Johnson made no mention of a national programme of home insulation, which was a £9.2 billion Conservative manifesto pledge, and warning that without a green recovery strategy in place, the UK risks locking itself into environmentally-damaging and unsustainable infrastructure.

The Association for Decentralised Energy responded by stating: “Build, build, build’ just isn’t enough- we need ‘retrofit, refurb and renovate’ to get into the green recovery now. Backing our buildings cannot just mean building new ones: in 2050, a whopping 80% of UK families will still be living in homes that have already been built today.

“We hope that today’s announcement comes before a stimulus announcement that delivers on the £9.2 billion committed to back our buildings in the Conservative manifesto. As the Prime Minister said today- COVID has taught us the cost of delay. An announcement on backing our buildings in the autumn will be too late; the installers who would deliver this infrastructure revolution will have been moved from furlough to redundancy. Without this investment in energy efficiency coming forward promptly in a wider stimulus package, today’s announcement is more boondoggle than ‘build back better”.