The chemical processes taking place in rocks deep in the Himalayan core are a signficant source of emissions, a new study finds 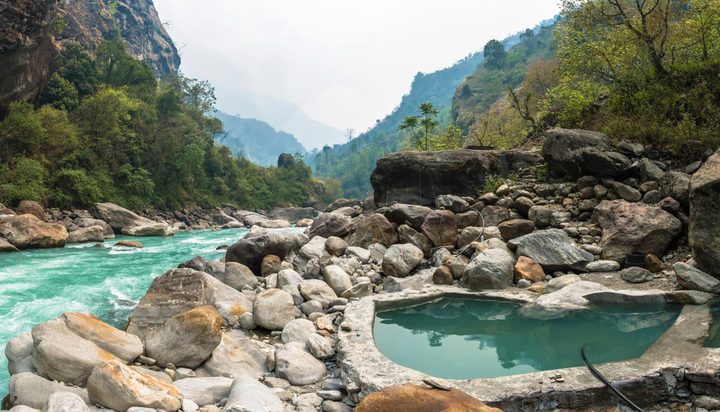 One of the world’s most famous tourist destinations, the hot water springs in the Himalayas, release a ‘huge amount of carbon dioxide’.

That’s one of the findings of a new study by the Wadia Institute of Himalayan Geology, which suggests carbon dioxide in these thermal springs are sourced from the decarbonation process of carbonate rocks which are present deep in the Himalayan core, along with oxidation of graphite.

The scientific team carried out a detailed chemical analysis of water samples collected from 20 geothermal springs from major zones of Garhwal Himalaya and found that water contains high levels of dissolved inorganic carbon.

Inorganic carbon is found primarily in simple compounds such as carbon dioxide.

The study published in the journal Environmental Science and Pollution Research also notes these geothermal springs have the potential to emit around 7.2 × 106 mol of carbon dioxide to the atmosphere every year.

The scientists of the institute, which runs under India’s Department of Science and Technology, argue such carbon dioxide emissions should be taken into account to assess global carbon discharges in the earth’s atmosphere.

Himalaya is home to around 600 geothermal springs, which have varied temperature and chemical conditions.