The Working Group will now start the process of local discussions on whether Copeland could be the right place to build a Geological Disposal Facility, with the community ultimately deciding if it wants to host a GDF or not 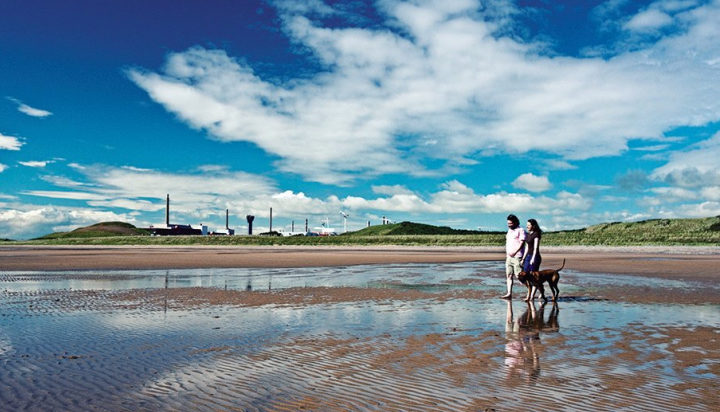 A family walks on the beach, with Sellafield - in Copeland - in the background. Image: RWM

Copeland in Cumbria has become the first community to formally consider hosting a disposal site for radioactive waste in the UK.

The Working Group, which was recently formed, will now start the process of local discussions on whether Copeland could be the right place to build a Geological Disposal Facility (GDF), with the community ultimately deciding if it wants to host a GDF or not.

The group consists of individuals and organisations, including Copeland Borough Council and representatives from Radioactive Waste Management (RWM), the government-owned organisation responsible for developing the GDF.

It will initially consider sites across the whole of the Copeland borough – excluding the Lake District National Park – and potentially including offshore underground facilities accessed from land.

A GDF is an underground facility designed to safely and securely dispose of the UK’s radioactive waste and involves building a series of specially designed and engineering vaults and tunnels deep underground.

It could potentially be three times deeper than the height of the Shard in London, Britain’s tallest building.

Once the waste is placed inside a GDF, the facility will eventually be permanently sealed.

RWM said the group’s formation is the first step in identifying a willing community and a suitable site to develop the UK’s capability to dispose of higher activity waste.

Chief Executive Karen Wheeler added: “This is a vital project for the UK and for future generations. Building a GDF will be one of the biggest environmental protection projects of our lifetime, and one of the largest infrastructure projects over the next century. For the successful community, the economic, employment and investment opportunities it creates will be truly transformational.

“The project will create large scale employment opportunities over decades, well into the next century, as well as major scope for locally-based supply chain and businesses. The government has also committed to make significant additional investment available for the community that is selected to host a facility.

“This is just the start of that process and no decisions on a location for a GDF have been made. We know there are other communities wanting to explore this potential for their area and I expect more communities to come forward.”