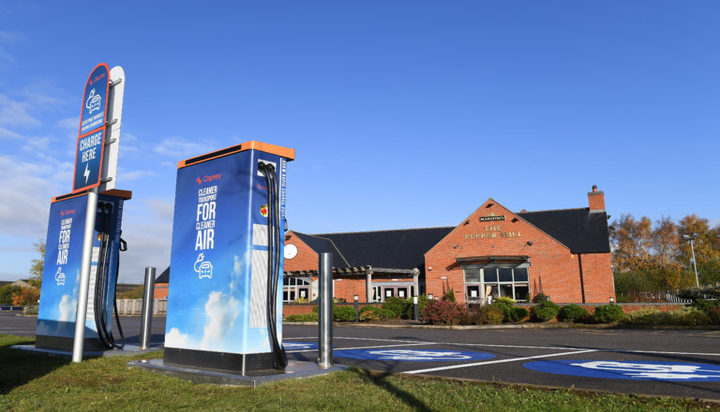 Almost 42% of Brits expect to drive an electric vehicle (EV) in the next five years.

That’s according to a new survey by the British pub and retail business Marston’s and rapid EV charging network Osprey, which predicts more than 16 million additional EVs will hit UK streets by 2025.

According to the survey of 2,000 adults, the number of available public charging points and the time it needs to charge an EV prove to be the biggest concerns of UK drivers.

Almost 59% of the respondents would prefer to use rapid public charging infrastructure compared to other charging speeds available, the analysis suggests.

In addition, more than a third of people would be encouraged to use public EV charging if there were good quality food and drink facilities at EV charging sites.

Marston’s has partnered with Osprey to deliver what is considered to be the UK’s largest network of rapid EV chargers at hospitality sites – the partnership will see a total of 400 rapid EV chargers installed across 200 sites.

The partners said the rollout, which began in November 2018, has already saved an estimated 183.7 tonnes of carbon dioxide and 1.15 tonnes of nitrogen oxide (NOx).

Once the full rollout of EV chargers is completed, it is predicted that eight tonnes of NOx annually will be removed.

That is the equivalent to the annual mileage of more than 8,759 Euro-6 compliant diesel cars.

Andy Kershaw, Head of Property at Marston’s, said: “Sustainability is becoming a key consideration in day-to-day life, with the demand for EV chargers only increasing.

“We are very proud to have achieved this milestone with Osprey and we look forward to developing our infrastructure further over the next twelve months.”

Ian Johnston, Chief Executive Officer of Osprey, said: “With the ban on the sales of new petrol and diesel cars less than 10 years away, it’s crucial to support EV drivers with the infrastructure that they want, rapid, convenient and accessible to all.”