Steel transport on veggie oil gets on UK rail track

The train transported 2,500 tonnes of steel product from Wales to West Midlands 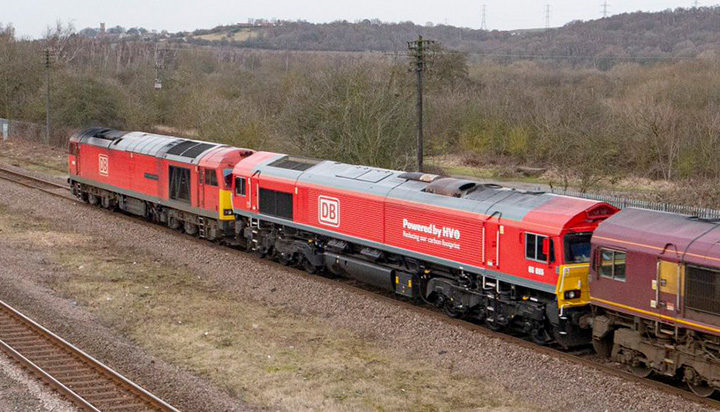 A train powered on 100% renewable hydro-treated vegetable oil (HVO) travelled from Wales to the West Midlands during a trial initiative designed to decarbonise freight operations.

The scheme, which was launched by the British freight company DB Cargo UK and the manufacturer Tata Steel, saw a Class 60 locomotive running on the green fuel.

The carbon-busting locomotive carrying around 2,500 tonnes of steel coil was claimed to be the first Class 60 powered purely by the vegetable oil to travel on the UK rail network.

The fuel, which is an alternative to traditional red diesel, is synthetically made through the hydro-treatment process from vegetable oils or animal fats which are predicted to reduce carbon dioxide and nitrogen oxide emissions by as much as 90%.

Tata Steel Logistic Operations Manager Gareth Lewis said: “The success of this trial is recognition of our goal for zero-carbon logistics. Our close working relationship with DB Cargo UK has been instrumental in achieving this important milestone.”

DB Cargo UK’s Head of Sales Roger Neary said: “We’ve now proved that HVO fuel can be used in our Class 60, 66 and 67 locomotives with negligible impact on power output, which is critical considering the volume of bulk materials we transport like steel and aggregates.”