Rishi Sunak has opened his red box – but what does the energy industry think? 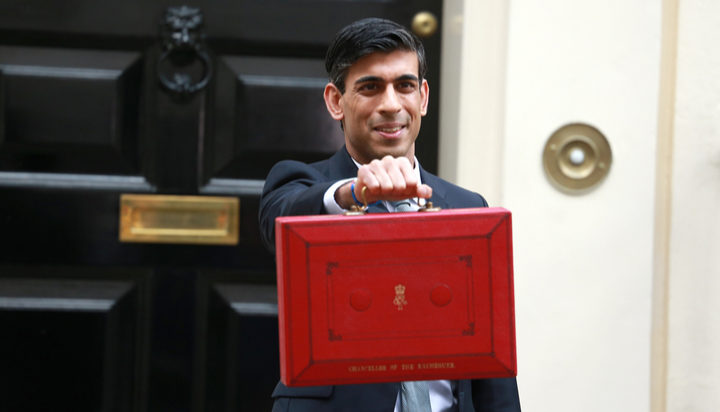 Rishi Sunak made his traditional pre-Budget pose outside Number 11 Downing Street with the red briefcase before heading to the House of Commons to unveil the Budget for the coming year.

A new UK Infrastructure Bank to boost net zero investment and green savings bonds were among the measures he announced.

The new Budget aims to protect jobs and livelihoods, fix public finances and lay the foundation for a future economy.

Mr Sunak began his speech by saying the government would do ‘whatever it takes’ to set ambitious goals for the coming months.

Chancellor’s plan is a gamechanger

Commenting on the Budget announcement today, RenewableUK’s Chief Executive Hugh McNeal said: “This is a big-bang moment for offshore wind manufacturing in the UK which will drive investment in a globally competitive domestic supply chain.

“The government is putting its support squarely behind the kind of strategic approach to securing supply chain investment which the industry has been making the case for during our intensive work with Ministers to deliver the green economic recovery this country needs.”

Mr McNeal explained this new funding to develop world-class offshore wind hubs in Teesside and Humber is a clear example of levelling-up in action and added: “There is a huge opportunity for UK’s offshore wind industry not only to supply UK projects but also to export to rapidly growing global markets.”

He estimates the next wave of renewable projects could inject £20 billion of private investment into the economy and support over 12,000 jobs.

Responding to the new spending plan, Energy UK’s Chief Executive Emma Pinchbeck said: “We need to unleash billions of pounds of capital investment to drive decarbonisation, so we welcome the creation of the National Infrastructure Bank.

“In a globally competitive renewables industry, upgrading our port infrastructure to support expansion of offshore wind will help our regional hubs attract jobs and realise the benefits of the energy transition.

“However, meeting the most ambitious climate change targets of any major economy will require more ambition than was in today’s Budget.”

Commenting on the green measures within the Chancellor’s Budget, Environmental Audit Committee Chairman, Rt Hon Philip Dunne MP, said: “The economy is on its knees after the pandemic and successive lockdown and it is completely right that protecting jobs and livelihoods has been prioritised.

“But the Chancellor has today missed an opportunity to go further, reducing VAT for green sectors including energy efficiency upgrades and investing more significantly in renewable and low-carbon energy.”

False start in the race to net zero

Luke Murphy, Head of the Institute for Public Policy Research Environmental Justices Commission, said: “The chancellor made some welcome green announcements today including green retail bonds, a National Infrastructure Bank with a focus on delivering net zero and a new green mandate for the Bank of England.

“But what should have been the firing of the starting gun on a decade of decarbonisation was more of a false start in the race to net zero.

“Despite the rhetoric, one of the biggest green decisions taken today was the decision not to roll over nearly £1.5 billion of funding for the government’s flagship green homes grant which was announced just last year by the Prime Minister.”

Dr Joanne Wade, Chief Strategic Officer at the Association for Decentralised Energy said: “We are disappointed with the lack of clarity in today’s budget on how the government plans to accelerate the uptake of retrofit measures at such a crucial time

“We call on Ministers to urgently fix the administrative problems hampering the Green Homes Grant and also to commit to a long-term programme that supports supply chain growth and public confidence in home energy refurbishment.”

Commenting on the Chancellor’s Budget, Rohan Malik, EY’s UK Managing Partner for Government and Infrastructure, said: “A green recovery required bold moves in the Chancellor’s statement, especially as the eyes of the world turn to the UK as we host COP26.

“We would expect to see much more detailed plans for the UK coming from the government on areas of international concern, such as carbon pricing, as we get ever closer to this global event.”

Andy Bradley, Director of the energy consultancy Delta-EE, said: “In the last budget before COP26, we hoped for evidence the green recovery rhetoric would be delivered on. Yet, despite hints of green policy such as the new investment bank, we lack the ambition needed to reach net zero.

“We know cutting VAT is politically possible for hospitality, so why not for green home improvements, especially when the Green Homes Grant is as good as scrapped?”

He noted today’s budget could have been used to support households to make greener choices, and support jobs in the sector: “Transport emissions are also falling too slowly, just a 1% drop last year on 2011 levels, as SUV sales are greater than electric vehicles.”

Important targets the UK must work to achieve, not just announce

David Parkin, Director of HyNet North West, said: “We are pleased to hear the Chancellor announce the financial backing to government’s commitment to a green industrial revolution.  These are important targets which the UK must work to achieve, not just announce.

“HyNet North West delivers on our national targets, it will deliver 80% of the government’s target for hydrogen production, 100% of the target for carbon capture and storage and a hydrogen town, all by 2030.”

Bank can play a catalytic role in net zero

“The bank can play a key role in catalysing the investment needed for projects to support economic recovery, net zero and enabling all parts of the UK to meet their long-term growth potential.”

She acknowledged it is encouraging to see more details of how the bank will operate and the solid initial amount of funding available to it and she added the commission looks forward to working with the government to build an effective relationship with the Bank.

Failure to clock the urgency of the climate emergency

In response to Chancellor’s Budget speech, Rebecca Newsom, Head of Politics for Greenpeace UK, said: “For all the talk of a green recovery, this Budget suggests the Chancellor has failed to clock the urgency of the climate emergency.

“A National Infrastructure Bank and green bonds could be steps forward, but without a guarantee, they will provide sustained investment to decarbonise buildings, transport and industry, they are unlikely to do much to advance climate action.

She added: “Meanwhile the government’s shambolic handling of the Green Homes Grant and ambitions for the City on ‘high quality’ offsetting are both steps in the opposite direction, leaving the UK with weakened authority on the world stage ahead of November’s climate conference.”

Gavin Graveson, Executive Vice President Veolia UK and Ireland, said: “Now is the time for a defined narrative and clear pathway towards net zero. As offices and businesses are preparing to reopen, it is essential that we take a new, more sustainable approach.

Mr Graveson said one of the most impactful environmental changes people can make is through energy choices.

He added: “Decarbonising heat needs to be at the top of all of our agendas. While this year has seen some progress towards greener heat supply, we need clearer financial drivers to allow an overhaul, and drive the systemic shift towards low carbon and renewable energy for homes and businesses.”

Commenting on the green savings bonds and UK infrastructure bank Chris Holmes, Co-Lead Investment Adviser at JLEN Environmental Assets Group Ltd, said: “The opportunity to purchase the world’s first green savings bonds is a positive development. Investors are increasingly looking for greater choice in the world of sustainable investment, allowing them to earn an ecological return as well as a financial one.

“Renewable energy and clean transport, in particular, offer an attractive long term opportunity, given the government’s repeated commitment to greening the UK’s economy and reaching net zero carbon emissions by 2050.”