Governor Jay Inslee signed the Climate Commitment Act, which will cap and reduce pollution and create revenue for climate investments to help the state accelerate the transition to a clean energy infrastructure and economy 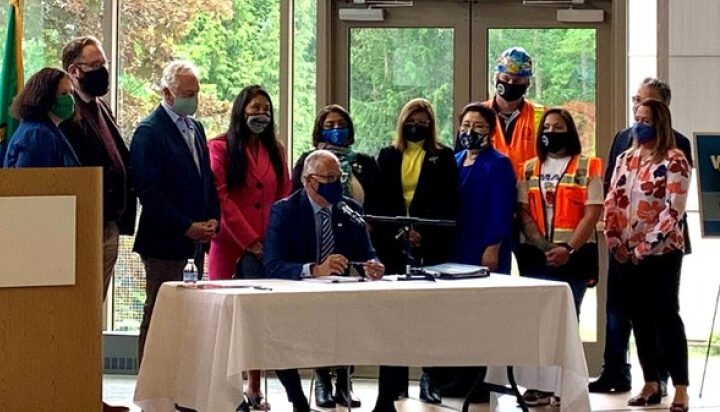 He signed the Climate Commitment Act, which will cap and reduce climate pollution and create revenue for climate investments to help Washington accelerate the transition to a clean energy infrastructure and economy.

It also addresses the disproportionate impact on overburdened communities that comes from burning fossil fuels, requiring the state to track air quality.

Hydrofluorocarbons are one of the fastest growing sources of greenhouse gas emissions in Washington, contributing nearly four million tons of pollution a year.

The legislation will build on federal and state hydrofluorocarbon policies to significantly reduce emissions from the super pollutants.

Limiting single-use plastics and boosting recycling are expected to decrease the demand for oil and move Washington towards greater sustainability while protecting the state’s beaches, oceans and wildlife.

Governor Inslee said: “We’ve got a heck of a job to do in the years to come. Our climate commitment, made by our legislature in 2020, is to cut climate pollution by over 50% in the next nine years, on our pathway to net zero climate pollution by 2050. It won’t be easy but these bills go a long ways to getting us there.

“Today we commit to our kids and grandkids to do the hard work so that they will have good jobs and a safe, healthy future, here in our beautiful home state.”