The group aims to highlight alleged greenwashing strategies ahead of COP26 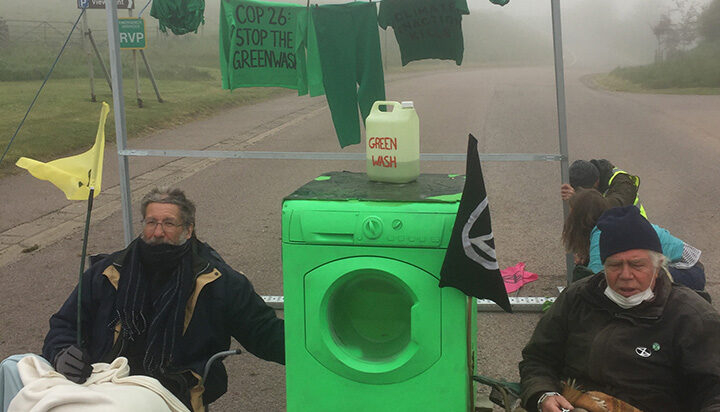 A group of Extinction Rebellion (XR) Scotland activists have today blocked the entrance of SSE’s gas power station in Peterhead, Aberdeenshire, with a washing machine.

Campaigners locked themselves to a green-painted washing machine and to two red gas canisters, preventing employees’ vehicles from entering the site.

The group has also erected a banner reading ‘Clean Gas is a Dirty Lie’ and even hung green clothes on a washing line.

The activists protest against SSE sponsorship of COP26. The company owns the most polluting power station in Scotland, they claim.

They allege the sponsorship is part of a greenwash campaign.

“The government need to ramp up the pressure on companies like SSE to end fossil fuel extraction and deliver a just transition for the sake of the local workforce.”

In a statement, SSE said: “As the UK’s leading generator of renewable energy, climate action is at the core of SSE’s business. We have set clear carbon reduction targets, aligned with the Paris Agreement and verified by the Science Based Target Initiative.

“We are currently developing plans for a new decarbonised power station at Peterhead, using carbon capture and storage (CCS) technology to remove carbon dioxide from its emissions.

“This project could play a major role in supporting wider industrial decarbonisation in Scotland, helping to ensure a just transition for workers and communities.”