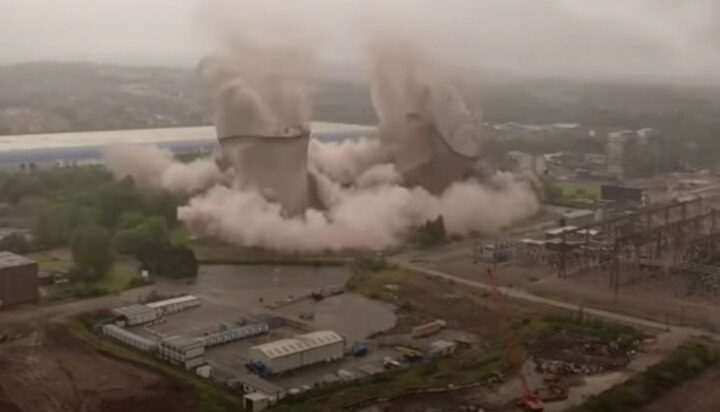 The four cooling towers of the former coal Rugeley Power Station in Staffordshire were demolished yesterday.

Hundreds of people gathered to watch the spectacle.

Under a controlled collapse, the 117-metre high structures, a symbol of fossil fuel power, are now a thing of the past, making way for the site’s low carbon redevelopment.

ENGIE, owner of the Rugeley Power Station site, will now start work on transforming it into a development of 2,300 new low carbon homes and a school.

Rugeley coal power station closed in 2016, after generating electricity for more than half a century.

Watch the demolition below on the video from the ENGIE YouTube channel:

Colin Macpherson, Divisional Chief Executive Officer for ENGIE UK & Ireland, said: “The next ten years are crucial to address the climate crisis – and in the same timescale this regeneration project will become a reference of sustainable living fit for the UK’s net zero future.”

Energy Minister Anne-Marie Trevelyan said: “We are committed to building back greener from the pandemic and ENGIE’s low carbon regeneration project is a great initiative demonstrating how industrial sites can be revitalised to provide sustainable living.”