Six in 10 managers responsible for energy performance in buildings believe that artificial intelligence (AI) could transform the way they interpret data to improve efficiency. 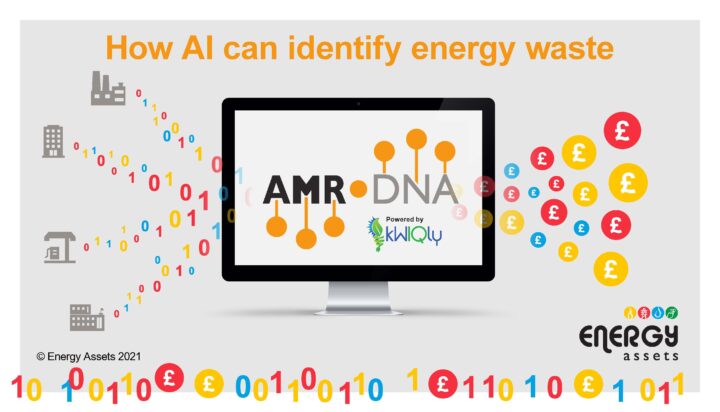 A snapshot poll of participants in an ELN webinar – Identify energy savings and demystify your energy data with AI – also found that less than one in ten currently have capacity to review consumption data more than once a week.

George Catto, Client Services Director for AMR DNA, who led the webinar, said the poll reflected the challenge for energy managers in analysing the huge volume of data now available through half hourly automated meter reads.

“It also underlines that manual interpretation of big data simply cannot identify the fingerprints of energy waste hiding in plain sight in a timely way without an army of analysts – and that simply is not practical for energy managers,” said George.

“That is why AI, such as the AMR DNA service from Energy Assets, powered by kWIQly, is increasingly on the radar as a way of optimising building energy efficiency and reducing carbon output.”

Using this as a reference point, the AI system can spot tell-tale ‘fingerprints’ of energy waste unique to each building through pattern recognition – such as equipment running needlessly, heating controls incorrectly set – and then provide a checklist of priority actions to drive up efficiency and reduce energy costs.

This enables AMR DNA to progressively learn what best performance for each building looks like.

“Consumption viewing portals are now commonplace, but while a portal may flag up alarms for obvious exception events, without a data validated benchmark managers won’t know that a building is performing poorly. And once data highlights the performance problems, which can be like finding needles in a haystack,  you still need to treat the cause  – it’s so much simpler if AI can provide the diagnosis.”

With AMR DNA, analysis of consumption data linked to a set of variables, such as weather information and comparative building performance, enables the AI system to spot patterns outside the expected norm. Once learned, the AI analyses half hourly data overnight and provides a daily checklist of potential problems for investigation.

For example, in the case of one school, AMR DNA flagged that the heating system was operating from 4am and that the boiler was firing at the end of the school day. Investigation revealed that opening external doors at home time was activating the thermostat – a problem that AMR DNA analysis revealed was prevalent in 30% of schools in the portfolio. An algorithm was written to address the issue.

The system also places simplicity at its core. For example, for a supermarket chain an out-of-hours turndown load report colour codes sites to show whether they are beating efficiency goals (blue) or failing (red). Energy manager can then investigate and either take action or identify reasons for the consumption change (a new in-store bakery for example). If it is the latter, AMR DNA will ‘learn’ this new profile for future reports.

“In short, AI does the heavy lifting for energy managers when it comes to making sense of data,” said George Catto. “The software will free up staff time and enable skilled professionals to get on with managing energy rather than looking at data, opening up more opportunities for cost and carbon reductions.”

The technology is also perfectly aligned to Net Zero planning and in tune with Environmental, Social & Governance strategies that are becoming increasingly important to consumers and stakeholders.

Among the organisations leading the energy efficiency agenda is The Energy Consortium (TEC), which manages 11TWh of gas and power, operates 10,500 meters and is responsible for £194m of collaborative spend on behalf of its members, which typically are from higher education and further education.

Speaking at the webinar, Stephen Creighton, Head of Member Services at TEC, said engagement with AMR DNA reflected the dramatic change in the energy landscape over the last 10 years.

“The role of energy managers is changing and without machine learning it’s impossible to analyse data on a daily basis. Saving money and reducing carbon is absolutely the number one priority for our members and is the major benefit of this system.”

You can listen to the webinar by going to https://www.energylivenews.com/2021/06/09/webinar-identify-energy-savings-and-demystify-your-energy-data-with-ai