An activist who was piloting a paraglider was forced to land on a stadium’s pitch, reportedly injuring spectators of the European Championship game between Germany and France 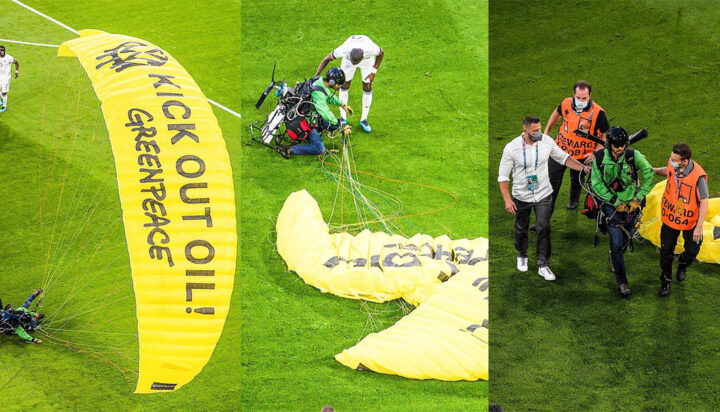 Several people attending the EURO 2020 soccer game between Germany and France in Allianz Stadium in Munich were reportedly injured after a Greenpeace activist’s paraglider was forced to land on the pitch.

The message ‘kick out oil’ was written on the paraglider, which landed on the field shortly before the game kicked off.

The stunt was meant to protest sponsor Volkswagen’s involvement, whose ‘climate-damaging’ diesel and gasoline vehicles are fuelling the climate crisis, according to Greenpeace Traffic Expert Benjamin Stephan.

The Munich police said: “The pilot injured two men during the approach. The injured were given medical care by the ambulance service and taken to hospitals for further clarification.”

It added that acute emergency medical care was not required and the pilot did not suffer any injuries.

The 38-year-old pilot was arrested for various offences, with the police highlighting that it has ‘no understanding whatsoever’ for such ‘irresponsible actions’ in which a ‘considerable risk’ to human life is created.

In a statement sent to ELN, the Union of European Football Associations (UEFA), the governing body of European football, said: “This inconsiderate act, which could have had very serious consequences for a huge number of people attending caused injuries to several people attending the game who are now in hospital and law authorities will take the necessary action.

“UEFA and its partners are fully committed to a sustainable EURO 2020 tournament and many initiatives have been implemented to offset carbon emissions.

“The staging of the match was fortunately not impacted by such a reckless and dangerous action, but several people were injured nonetheless.”

Commenting on the incident, Greenpeace spokesman Benjamin Stephan said: “We apologise that this demonstration did not go as planned and that someone was apparently injured. That was never our intention. The paraglider should fly over the stadium and drop a latex ball with a message of protest onto the field.

“Technical difficulties led to the fact that the pilot was forced to land in the stadium. We deeply regret that this put people in danger and apparently injured them.”

In a statement, Greenpeace Germany said: “This protest was never intended to disrupt the game or injure people.

“We hope everyone is fine and no one has been seriously injured. Greenpeace actions are always peaceful and non-violent. Unfortunately, not everything went according to plan with this campaign.”

ELN has contacted Greenpeace Germany to ask about the type of fuel used to power the paraglider.

A spokesperson confirmed it was an electro-powered paraglider.