Google to show cleaner flights and routes on search results 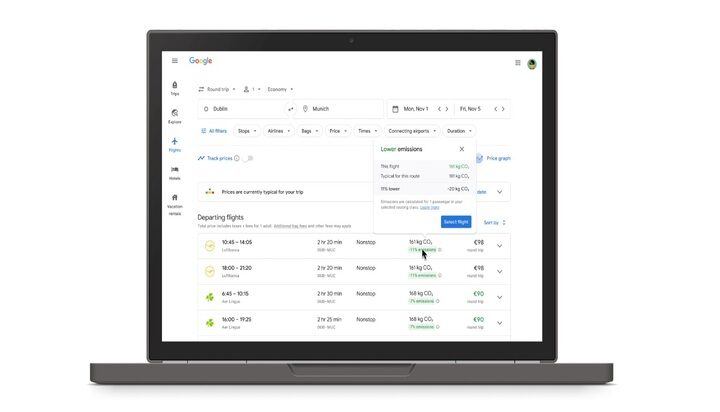 Starting today, internet users searching for flights will be able to see the environmental impact of the flight they choose.

Google has launched updates on its popular features, including Google Flights and Google Maps.

Flights with significantly lower emissions will be labelled with a green badge, Google said.

The tech giant said it is able to estimate the carbon dioxide emissions of flights by combining data from the European Environmental Agency with the flight-specific information it receives from airlines and other providers such as aircraft type, trip distance and the number of seats in each seating class.

Richard Holden, Vice President of Google Travel Products, said: “These emissions estimates are flight-specific as well as seat-specific. For instance, newer aircraft are generally less polluting than older aircraft, and emissions increase for premium economy and first-class seats because they take up more space and account for a larger share of total emissions.”

Google has also updated its Google Maps which will display not only the fastest route, feature announced earlier this year but also the most fuel-efficient.

Based on insights from the US Department of Energy’s National Renewable Energy Laboratory, eco-friendly routing has already rolled out in the US on Android and iOS, with plans to expand to Europe and beyond in 2022.