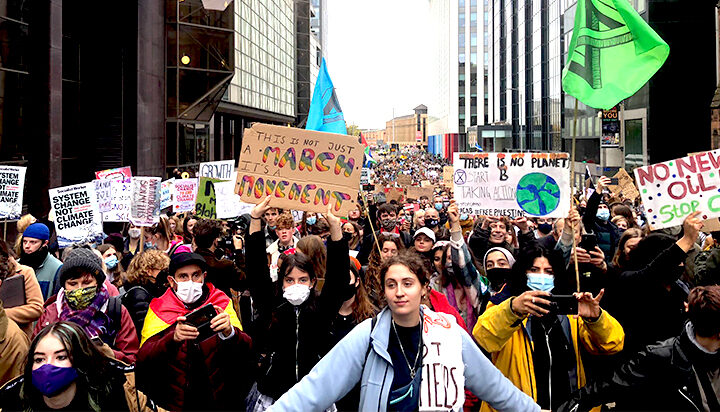 Young people came to COP26 today ensuring their voices were not lost behind the policymakers and celebrities taking centre stage.

Today’s focus was on ‘Youth and Public Empowerment’ and proceedings were co-chaired by YOUNGO, which is the official children and youths’ constituency of the UNFCCC.

YOUNGO represented the views and thoughts of more than 40,000 young climate leaders worldwide and made these opinions known to the ministers at COP26 – which included demands for further climate finance, mobility and transportation, as well as wildlife protection.

The thoughts of youngsters were not only heard inside the conference but on the streets of Glasgow today, as Greta Thunberg led a march of climate activists calling on world leaders to ‘listen to the planet’.

This also follows Ms Thunberg’s claims yesterday that the climate summit had become a ‘greenwashing campaign’ for politicians and world leaders.

Education ministers from many countries launched a new initiative that puts climate change at the heart of education for young children, following in the footsteps of other nations including South Korea, Albania and Sierra Leone.

Heeta Lakhani and Marie-Claire Graf from YOUNGO, said: “YOUNGO has been working closely with the UK Presidency and the UNFCCC Secretariat to co-design Youth and Public Empowerment Day.

COP26 President Alok Sharma praised the desire of those who spoke at the summit: “Wherever I have been in the world, I have been struck by the passion and the commitment of young people to climate action.

“The voices of young people must be heard and reflected in these negotiations here at COP. The actions and scrutiny of young people are key to us keeping 1.5 alive and creating a net zero future.

“I am also aware of the fear and anxiety many of them feel about the future of the planet, including my own children.”