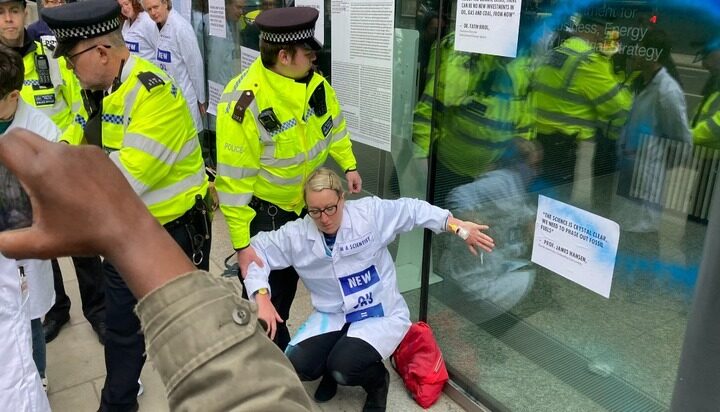 Extinction Rebellion members have glued their hands to the glass facade of the building of the UK Department for Business, Energy and Industrial Strategy (BEIS) to protest against the government’s plan to support domestic oil and gas production.

The protest follows the publication of the government’s Energy Security Strategy which promised to continue the use of North Sea oil and gas.

At least ten Extinction Rebellion scientists have been arrested for spray painting the group’s symbols on the glass facade of the BEIS building.

The activists said: “Our brave Extinction Rebellion scientists were carried away by the police.

“We will be back, again and again, until this fossil fuel madness ends. Listen to the serious science, not to partying politicians.”

Commenting on the protest, Business and Energy Secretary Kwasi Kwarteng tweeted: “My message to Extinction Rebellion activists gluing themselves (?!) to my Department: You cannot and we won’t switch off domestic oil and gas production.”

A BEIS spokesperson told ELN: “We are gradually driving down demand for oil and gas, but we cannot have a cliff edge by turning off our domestic source overnight.

“Doing so would put our energy security, British jobs and industries at risk and simply increase foreign imports, not reduce demand.

“Our British Energy Security Strategy sets out a long-term plan to ramp up cheap renewables as we transition away from expensive fossil fuels.”

Scientists say it, the UN say it, kids say it….

It's killing us now, and fucking our future. pic.twitter.com/GFPlfsPQKL

My message to XR activists gluing themselves (?!) to my Department:

You cannot – and we won’t – switch off domestic oil and gas production.

Doing so would put energy security, jobs and industries at risk – and would simply increase foreign imports, not reduce demand.