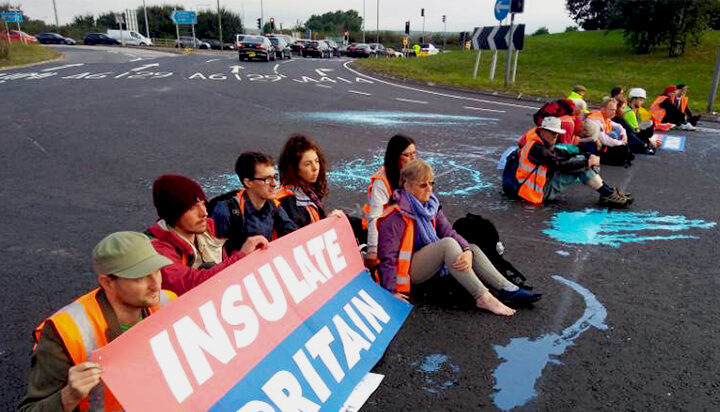 The name “Insulate Britain” was reportedly heard during a meeting at Downing Street regarding a potential £1 billion package for insulating the UK’s leakiest homes.

According to The Times, a Number 10 official suggested calling the scheme “Insulate Britain”, a proposal which was then dismissed when someone else stressed that this name has been already in use by the disruptive campaign group.

Members of Insulate Britain were asked by the Guardian about this possibility and they said they would feel happy to let the government borrow the group’s name if officials can’t find a different one.

It was reported yesterday that Prime Minister is discussing plans to insulate hundreds of thousands more homes before winter, diverting over £1 billion from existing schemes.

Reports claim that the option of diverting the money from the £1 billion Public Sector Decarbonisation scheme is being explored.

In response to the reported plan, Joanne Wade, Chief Strategic Advisor to the Association of Decentralised Energy, commented: “Cutting the Public Sector Decarbonisation Scheme at such short notice would be a grave mistake – not only would it lead to issues for the supply chain and derail future action on tackling climate change, it also undermines industry confidence in such schemes.

“The government desperately needs to provide more energy efficiency funding to the people most acutely affected by skyrocketing energy costs, but it also needs to provide a more consistent approach to funding clean, decentralised energy technologies so that they can continue to grow and play their pivotal role in tackling the energy crisis.”

Climate solutions charity Ashden said this shift of money will eventually “come back to bite the government in the long-term”.

It added: “It really is robbing Peter to pay Paul. The government is setting itself up for failure if does not strengthen the supply chains needed to deliver this ambitious goal.

“Local authorities may have to hand back government funding because they don’t have the installers to get the work done.

“So while it is right to set ambitious targets – so suppliers can see the long-term trajectory and invest, we need to do so much more on the skills front, so that they can deliver on this work.”

A government spokesperson told ELN: “We are investing £6.6 billion in total this parliament to improve the energy efficiency of homes and buildings across the country, benefiting tens of thousands of homes and delivering savings of £300 a year on average on their energy bills.

“We continue to look at ways to make UK homes more comfortable and cheaper to heat, which is particularly important in light of increased energy bills.”