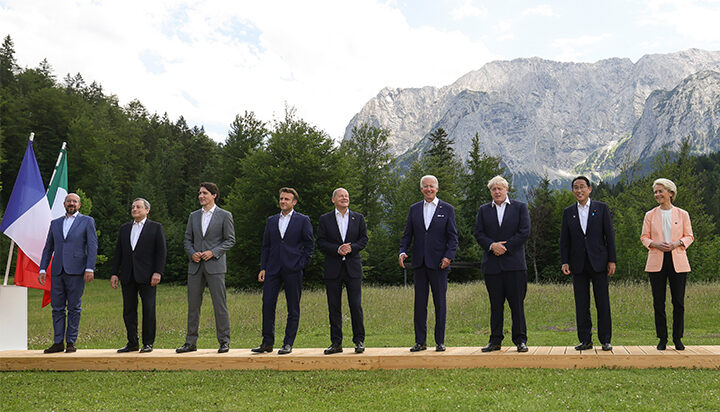 G7 leaders are looking to strike back at Vladimir Putin’s Russia by imposing a price cap on Russian oil exports – to cut finances for its ongoing invasion of Ukraine.

The Prime Minister met with President Joe Biden and the leaders of the European Commission, Italy, Canada, France and Germany in the Bavarian Alps to discuss the next steps in clapping back at the Kremlin.

Hiked crude oil prices are currently benefiting Russia, as it continues to pursue the war in Ukraine – and the G7 leaders are optimistic this cap will help turn off the cash tap.

Mario Draghi, Italian Prime Minister, reportedly stated, “we must reduce the amount of money going to Russia and get rid of one of the main causes of inflation.”

These conditions would mean that shipping companies transporting Russian oil would not be able to do business if they did not declare they were trading the product at the economic ceiling laid out in the price cap.

Now is not the time to give up on Ukraine, they need the support and resolve of the @G7 more than ever.

The UK will continue to back Ukraine every step of the way, because we know that their security is our security, and their freedom is our freedom. pic.twitter.com/hXJ4jhCN1I

The push for a price cap has been heavily backed by the US, with other members including Germany still debating whether or not to go ahead with the move.

India, Argentina, South Africa, Senegal and Indonesia were also invited to the G7 talks, as these nations have frequently looked to buy discounted Russian oil to offset their own economic woes.

The main promoter of this sanction, the US, has already banned all Russian oil imports, with the UK government vowing to stamp them out by the end of 2022.

Ukrainian President Volodymyr Zelenskyy was invited to partake in the talks via video call.

The G7 has also announced the ‘Partnership for Global Infrastructure and Investment’, which will see $600 billion (£488bn) invested by member states collectively by 2027 for developing nations to improve climate resilience, energy access and healthcare.