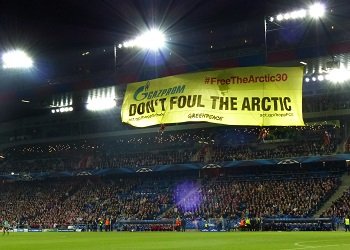 Four Greenpeace activists abseiled from the roof of a football stadium (pictured) in Switzerland earlier this week in protest against Gazprom’s plans to drill in the Arctic. The intervention during the match between FC Basel and Schalke at St. Jakob-Park stadium was meant to be a “symbolic” red penalty card for Gazprom – the Russian […]