Oil giant BP signed a huge agreement with an Azerbaijani methanol production firm in London yesterday. The contract with AzMeCo, which will see BP buy methanol from the company’s plant […] 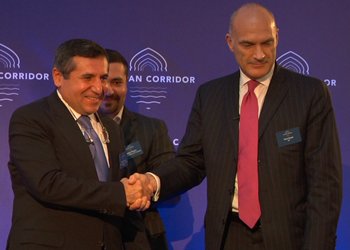 The contract with AzMeCo, which will see BP buy methanol from the company’s plant in Azerbaijan, was witnessed by delegates at the Caspian Corridor conference (pictured).

The countries in the Caspian region are believed to be some of the fastest growing economies in the world, with Azerbaijan a nation rich in oil reserves.

Nasib Piriyev, CEO of the firm told ELN: “The Azerbaijan Methanol Company has committed its volumes of methanol for the next several years to BP. It shows great collaboration between Azerbaijan and Britain, between Trans-Caucasus and Europe. For us this is a very important milestone to continue to grow as a well-structured corporate company.”

He added the agreement will benefit both BP and Azerbaijan: “First of all, it will bring additional profits to our country. Secondly, BP expands its visibility and presence in Azeri market and we are the only private company, which has assigned an agreement with BP. It’s a mutually interesting and mutually beneficial agreement.”

This $360 million (£224.6m) methanol plant is believed to be the only one in the South Caucasus and Central Asia and is expected to be launched early next year.