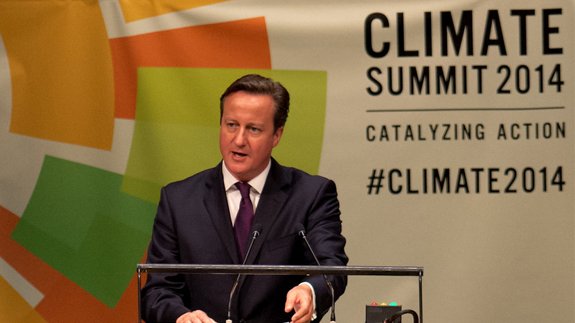 Speaking at the UN Climate Summit in New York, the Prime Minister said climate change is “one of the most serious threats” facing our world and suggested its framework should be “built on green growth not green tape”.

Highlighting the UK’s progress he added: “We are investing in all forms of lower carbon energy including shale gas and nuclear, with the first new nuclear plant coming on stream for a generation.”

The Prime Minister urged the world to “step up” to deliver a new, ambitious, global deal “which keeps the 2C goal within reach”. He also pledged to push EU leaders to offer to cut emissions by at least 40% by 2030 at next year’s climate summit in Paris.

Mr Cameron is among hundreds of global leaders attending the summit in New York, with each leader delivering a speech setting out their vision on cutting emissions.

He also highlighted the need to give businesses the certainty they need to invest in low carbon technologies.

Friends of the Earth however slammed Mr Cameron’s speech saying promoting fracking at a climate change summit “is liking trying to sell cigarettes at a hospital”.

“With clean renewable power becoming ever cheaper, available now and accessible to ordinary people, we simply don’t need to frack. It’s at best a red herring and at worst a dangerous folly.”

Next December, the world will gather in Paris to secure a legally binding, global climate change agreement from all countries for the first time ever.