Rio+20: “Disappointing” or a new direction? 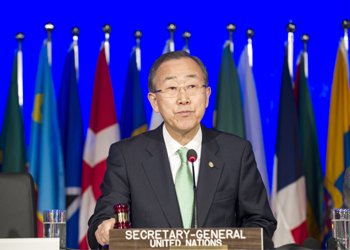 He said: “The speeches are over. Now the work begins… The outcome document provides a firm foundation for social, economic and environmental well-being. It is now our responsibility to build on it.”

However the UK’s Deputy Prime Minister Nick Clegg is said to have dismissed the results as “disappointing” while Environment Secretary Caroline Spelman suggested last week she would have like to see more agreements on the table.

They are not the only ones to express reservations.

“Rio+20 represented a unique possibility for the world, but what started as a zero draft outcome document has seemingly evolved into a zero result statement.”

Campaigners have accused the summit of catering to “corporations” more than it should have done.

Nnimmo Bassey, chair of Friends of the Earth International said: “World leaders failed at their Summit in Rio, mainly because of the undue influence that multinational corporations have on them and the UN.”

The UN chief’s words appear to challenge this suggestion. At the closing ceremony he said he was also encouraged by more than 700 concrete commitments registered at the Conference which included some from governments, business, industry and financial institutions.