Sainsbury’s has installed energy efficient LED lighting in its new store (pictured) in Staffordshire, which is claimed to help cut energy usage by nearly 60%. The company claims it is […] 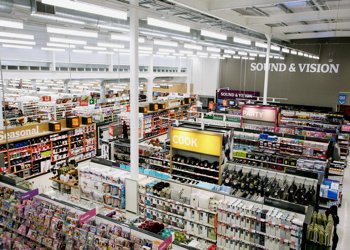 Sainsbury’s has installed energy efficient LED lighting in its new store (pictured) in Staffordshire, which is claimed to help cut energy usage by nearly 60%.

The company claims it is the “first supermarket in the world” to have General Electric (GE) Lighting’s latest LED technology, which includes daylight sensors to make the most of natural daylight. Sainsbury’s claims this will save 59% of energy at its Leek store and reduce the new store’s carbon footprint. This is equivalent to energy needed for more than 10 million cups of tea or more than one million miles in an electric car.

Other features in the store include a biomass boiler, rainwater harvesting and natural regrigeration. The new installations are part of the firm’s aim towards achieving its target of cutting carbon emissions by 30% by 2020.

Paul Crewe, Sainsbury’s Head of Sustainability said: “We originally trialled the world-first installation of the new LED system in one of our local convenience stores in Scotland late last year and the initial findings were so positive that we decided to install it in our new Leek supermarket. We are confident that it will deliver an enhanced shopping experience as well as significant energy savings. We will be monitoring its performance closely over the coming months as a potential technology for carbon reduction in our stores.”

The biomass boiler, which will be used to heat the store and hot water, will use renewable resources like wood chips or pellets instead of fossil fuel based gas. Rainwater harvesting is expected to cut water usage by 45% and natural refrigeration for fridges and freezers could help the store reduce carbon emissions by 33%.