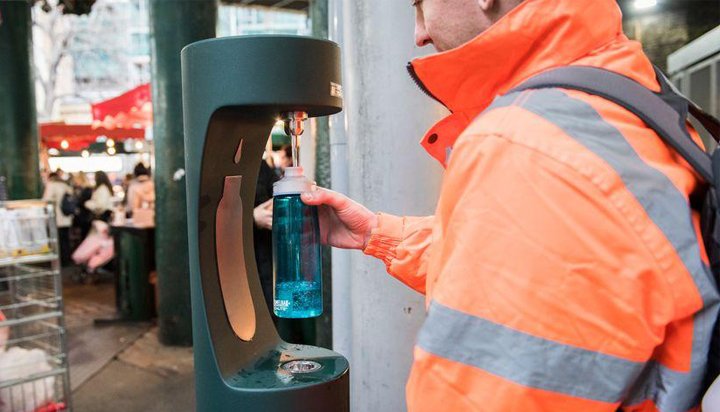 London Mayor Sadiq Khan has confirmed the locations of 20 new water fountains for the public across the city.

They will be located across shopping centres, museums, business districts and other venues and are part of the mayor’s ambition to reduce plastic waste.

Statistics compiled by the Zoological Society of London’s One Less campaign estimates the average Londoner buys more than three plastic bottles a week – totalling 175 a year.

Water fountains have so far been installed at Valentines Park, Redbridge, Kingly Court located off Carnaby Street, Westminster and Liverpool Street Station – and are already said to be popular.

More than 8,000 litres of drinking water – the equivalent of 16,000 bottles – has been dispensed from the Liverpool Street Station foundations in less than one month and the one off Carnaby Street has been used more than 10,000 times a month.

The latest confirmed locations include Guys Hospital in Southwark, Swiss Cottage Open Space in Camden, The Natural History Museum in Kensington and Windrush Square in Brixton.

Mr Khan said: “Water fountains are a simple but effective way to encourage Londoners and visitors to ditch plastic bottles and instead refill reusable ones. With the hot weather we’ve seen this summer, the demand is greater than ever for quick and easy ways of accessing free drinking water and I’m pleased to confirm the locations for the first 20 of our new public water fountains.

“Some of these are already attracting thousands of visitors a day and City Hall are working on plans to secure many more across London.”