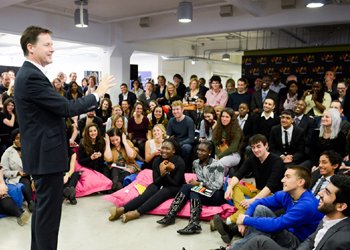 Ever since Labour leader Ed Miliband pledged to freeze energy prices last month if he wins the next election, the debate over energy prices in the highest ranks of government has become heated.

Speaking yesterday at the launch of a business start-up centre Mr Clegg told an audience of young adults: “I don’t think anyone should think that by scrapping all the levies suddenly with one bound we will be free. We won’t.”

He said that like “everyone else” he wants the government “to strain every sinew to keep those bills down” but claimed scrapping or reducing green levies, something Prime Minister David Cameron has set his sights on, would not help.

The Lib Dem MP said: “Actually what will happen is that you will have less investment, probably higher bills over time and an increase in fuel poverty. That cannot be the right answer. The whole point of putting some of these levies on bills is to make sure that we do keep lights on.”

A better tactic for cutting bills is to save energy, he went on: “People’s bills go down over time by making sure that their homes are more properly insulated and that fuel poverty is properly tackled. Of course we need to keep everything under review – I don’t want to see a penny more going on to bills than is strictly justified,” reported the Daily Mail.