The world’s largest solar-powered bridge was officially opened at London’s Blackfriars railway station yesterday. A total of 4,400 panels cover the roof of the Blackfriars Bridge across the River Thames […] 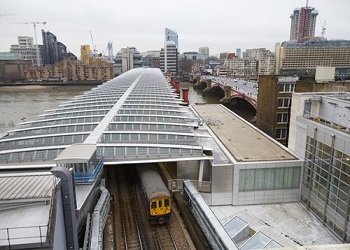 A total of 4,400 panels cover the roof of the Blackfriars Bridge across the River Thames and is expected to generate 900,000KWh of energy every year – half of the station’s electricity needs.

They are also expected to cut carbon emissions by around 511 tonnes every year.

David Statham, Managing Director of First Capital Connect, which runs Blackfriars station said: “Electric trains are already the greenest form of public transport – this roof gives our passengers an even more sustainable journey. The distinctive roof has also turned our station into an iconic landmark visible for miles along the River Thames.”

The project is part of a £6.5 billion programme to increase capacity on the Thameslink route, which runs from north to south of the capital through central London.