Editorial – Happy Xmas enjoy it while the lights are still on…

Happy Christmas to all our readers and of course the whole ELN team. As I sit waiting for my lamb to roast away, oh yes untraditional I know but delicious […] 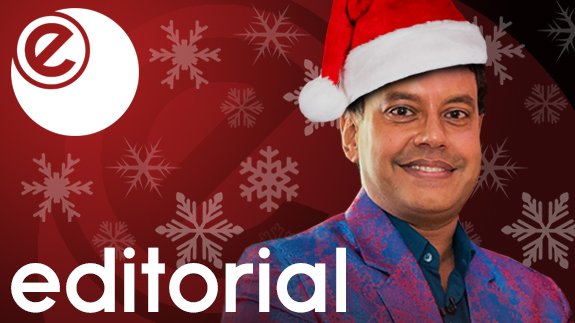 Happy Christmas to all our readers and of course the whole ELN team.

As I sit waiting for my lamb to roast away, oh yes untraditional I know but delicious all the same, I know the power to run my oven is guaranteed.

Sadly many families in Cumbria won’t be having that certainty, in fact for many having power is a luxury as they survey wet, damp, flooded homes. The same goes for millions around the world in developing nations or rural Africa.

The heat to keep us warm, the light to enjoy ourselves by, the electricity to power your hoverboard or ipad is something we take so for granted, that it is like the air around us. You take no notice of it, until it runs out.

My relatives in India often have periods of ‘load shedding’ when the power of the grid fails and back up diesel generators kick in. Speaking to my cousin earlier they’d had exactly that, a 20 minute cut early on Xmas day.

Things are much better than before but power cuts are still a regular part of life for all homes and businesses in the world’s third biggest economy, (ranked by GDP figures in 2014), so here as I write this in the world’s 10th richest, I ask why?

The reason is simple.

We are lucky to live in a country where the infrastructure, though old, works. It has been built up over a century to give us certainty and even in the winter with the tightest margin for years, we are secure in the power we have.

India, China and those catching up are having to build to cope with huge population demands and create pipes, powerlines and plants where there were none.

But we are not immune from their fate. This year we closed more coal plants and announced we would shut them all within a decade. Intermittency is being avoided by importing huge amounts of gas. We have creaking cables and transmission lines. We are way behind on nuclear build and renewables, though now a significant percentage of power, are never going to plug the gap.

Luckily wholesale prices are low and experts say the might well stay that way for a year or so but as OPEC predicted just a few days ago, prices will rise again. We are surviving on cheaper gas for now. Your household bill this winter will be lower than last.

But unless 2016 is the year of massive investment and rebuilding, I think you may find the phrase ‘guaranteed power’ entering the history books.

Hey it’s Xmas and I should be cheerful, so enjoy your wine, beer and pudding. Watch the telly and get ready for the sales tomorrow or as I will do, the trip to the football.

But while we celebrate, perhaps we should just be thankful and not take for granted the power that’s making this merriment possible and hope those ‘in power’, are taking steps to ensure you can have the same fun next year!

Have a cracking time!