The world’s largest land-based moving structure has been slid over the Chernobyl nuclear disaster site. Big enough to house Notre Dame and longer than two 747 jumbo jets, the €1.5 […] 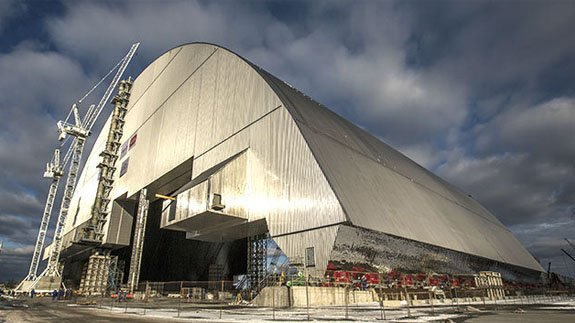 The world’s largest land-based moving structure has been slid over the Chernobyl nuclear disaster site.

Big enough to house Notre Dame and longer than two 747 jumbo jets, the €1.5 billion (£1.3bn) New Safe Confinement is expected to safeguard the radioactive reactor building and tonnes of nuclear fuel still inside for at least a century.

It has been equipped with remotely controlled cranes and machinery to begin the task of dismantling the hastily built shelter erected after the 1986 disaster at the site.

The explosion at Chernobyl’s reactor number four occurred on 26th April, which killed around 50 people. However medical estimates suggest around 4,000 people died prematurely due to radiation exposure.

Thousands of people are said to still have health effects and an “exclusion zone” 20 miles in radius around the plant remains in place.

The completion of the installation of the huge steel arch was celebrated with a ceremony at the site today, attended by Ukrainian President Petro Poroshenko, diplomats and site workers.

He said: “Many people had doubts and didn’t believe… However, I congratulate you, dear friends. Yes, we did it.

“Let the whole world see what Ukraine and the world can do when they unite. How we can protect the world from nuclear contamination and nuclear threat. It would be great to further maintain this strong solidarity for the sake of peace.”

The European Bank for Reconstruction and Development (EBRD), which has managed the funding for the clean-up said the programme to transform Chernobyl into an environmentally safe and secure condition by November 2017 is on track.