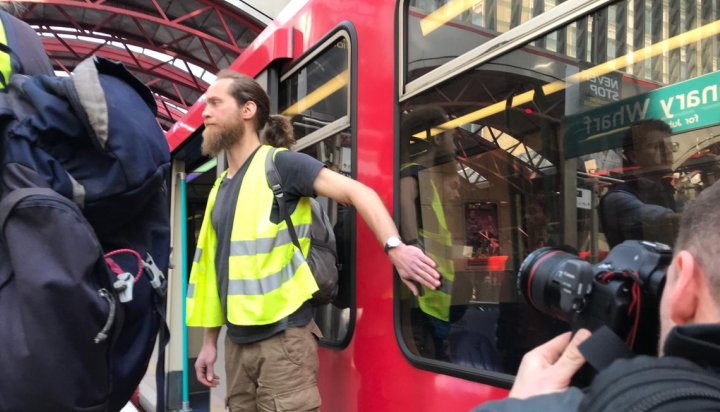 Extinction Rebellion climate activists have climbed on top of a Docklands Light Railway (DLR) train as part of the third day of protests across the capital.

A number of demonstrators climbed onto the roof of a light train at Canary Wharf station, while another glued his hand to the window of a carriage.

In a statement on its website, the group said it aims “to highlight government’s disastrous inaction on climate and ecological emergency” and added it hopes to “create moments in time when humanity stops and fully considers the extent of the harm we have done and are doing to life on Earth”.

The group demands the government declares a climate emergency, reduces greenhouse gas emissions to zero by 2025 and sets up a people’s assembly to deal with global warming.

Police have today disabled WiFi on the London Underground in a bid to disrupt communications between the activists.

London Mayor Sadiq Khan tweeted: “In a statement posted on Twitter he said: “It is absolutely crucial to get more people using public transport, as well as walking and cycling, if we are to tackle this climate emergency – and millions of Londoners depend on the Underground network to get about their daily lives in our city.

“Targeting public transport in this way would only damage the cause of all of us who want to tackle climate change, as well as risking Londoners’ safety and I’d implore anyone considering doing so to think again.”

More than 290 arrests have now been made.