ScottishPower, INEOS and General Electric were among the companies that met with Business Secretary Andrea Leadsom for her first roundtable on the UK leaving the EU 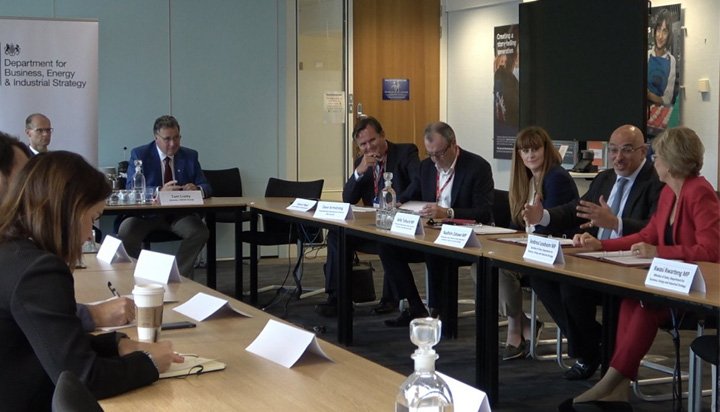 A range of businesses that met with newly appointed Business Secretary Andrea Leadsom said they were “excited” about the opportunities after Brexit, including developing renewable energy, clean growth and electric vehicles (EVs).

ScottishPower, INEOS and General Electric were among businesses that met with Ms Leadsom for her first roundtable on the UK leaving the EU, pledging to support employers to prepare for 31st October 2019.

According to BEIS, the companies, that included said while they expressed some concerns about the readiness for a no-deal Brexit, none of the issues were insurmountable and that they were keen to take up the chance to trade both with EU member states and countries outside the region.

The main messages from the businesses were that the government should ramp up its communications to prepare for Brexit and they were “well prepared” for the UK to leave the EU on 31st October 2019 but that this was not often acknowledged in public debate and commentary.

BEIS said the businesses, including BAE Systems, JD Weatherspoon and Laing O’Rourke, were also excited about boosting foreign direct investment, trading with the Asian-Pacific economics and attracting the best talent from around the world.

Ms Leadsom urged the firms to speak with their colleagues and trade associations and pass on the message that government stands behind them and is ready to support efforts to prepare for Brexit.

She also encouraged them to continue their positive approach to the future and to talk about the opportunities that lie ahead.

Keith Anderson, CEO of ScottishPower said: “The meeting… with the Secretary of State was fantastic. It’s always great to have a government who come out and engage with business and listen to business and want to understand concerns and opportunities that businesses are bringing forward.

“There are always great opportunities to invest in as a business.”