A $1.2 million (£0.77m) facility for testing new wind turbine blades has officially been opened in Clarkson University in the US. The Centre for Evaluation of Clean Energy Technology (CECET) […] 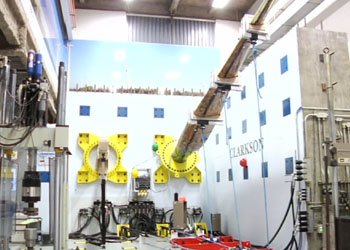 A $1.2 million (£0.77m) facility for testing new wind turbine blades has officially been opened in Clarkson University in the US.

The Centre for Evaluation of Clean Energy Technology (CECET) and the New York State Energy Research and Development Authority (NYSERDA) teamed up with the University for the Blade Test Facility, which will test the strength and rigidity of small and medium scale turbine blades.

It will help wind turbine manufacturers, with blades that range from backyard-sized residential turbines to those capable of providing significant power for a municipal facility, a large farm or manufacturing complex.

Blade testing is necessary to certify wind turbines to international standards for strength and safety and can be used by manufacturers to market the benefits of their products as large and frequent fluctuations in wind intensity can cause structural problems for turbine blades.

Francis J. Murray Jr., President and CEO of NYSERDA said: “Governor Cuomo has made it a priority for the state to increase its renewable energy generation and wind is a valuable component in New York’s renewable energy portfolio.

“By investing in this vital laboratory, NYSERDA is helping to bolster the wind industry in general and in particular wind power investment in New York State. This facility marks another important step in expanding the state’s clean energy economy and will bring economic activity to the North Country.”

NYSERDA has contributed $887,000 (£571,082) to CECET for the facility. It currently provides up to 50% funding for small and medium wind turbines for households, farms, businesses, municipalities and other power users.

Earlier this year electronics giant Samsung announced it would test a prototype of its new 7MW offshore wind turbine at a newly constructed test facility in the UK.