Solar gets squeeky with polystyrene power-up

Sleek solar panels could soon be made of a slightly less sparkly substance – polystyrene. That’s according to researchers from the University of Manchester, who say swapping expensive polymers for […] 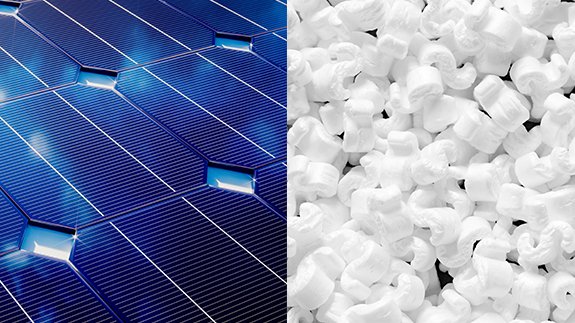 Sleek solar panels could soon be made of a slightly less sparkly substance – polystyrene.

That’s according to researchers from the University of Manchester, who say swapping expensive polymers for polystyrene particles could make new types of solar cells more stable and slash the total cost of manufacturing each unit.

The scientists behind the discovery say it could serve the important purpose of making electricity cheaper in the future for the public at a time when energy prices are increasing.

The research shows how using insulating polystyrene microgel particles can improve the performance of Perovskite Solar Cells (PSCs), a new kind of solar technology using a relatively cheap compound to capture light, rather than the more expensive silicon traditionally used.

However, the Perovskite used as a light absorber quickly degrades when exposed to water, reducing its practicality.

The cells also rely on a hole-transportation polymer layer, which promotes the efficient movement of electrical current but is expensive and unstable.

Brian Saunders, Professor of Polymer and Colloid Chemistry at The University of Manchester, said: “In this study we used polystyrene, which is 1/10,000th of the cost of polymers to produce and is also hydrophobic which helps improve the stability of PSCs.

“Overall the enhanced stability and lower costs of production hugely outweigh any of the decreased efficiency.”