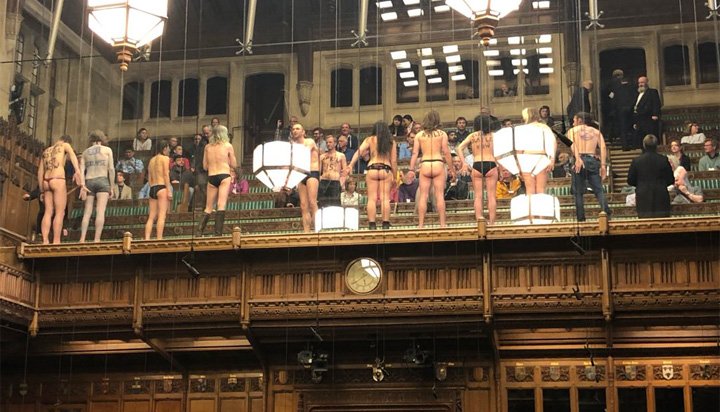 A dozen largely naked climate change protesters who disrupted a Brexit debate at the House of Commons yesterday have been arrested on suspicion of outraging public decency.

The activists from Extinction Rebellion stripped off and glued their hands to surfaces in the public gallery at the Commons “to draw the politicians’ attention to the climate and ecological crisis”.

Some of them were dressed in only underwear with messages painted on their bodies that said “Climate justice act now” and “eco collapse”.

Two of the activists wore full grey body paint and elephant masks while the other pointed to the “elephant in the room”, saying “there is an emergency. It isn’t Brexit – it is the climate”.

Speaker John Bercow told MPs to ignore the demonstration in the gallery and continue with the debate on Brexit. 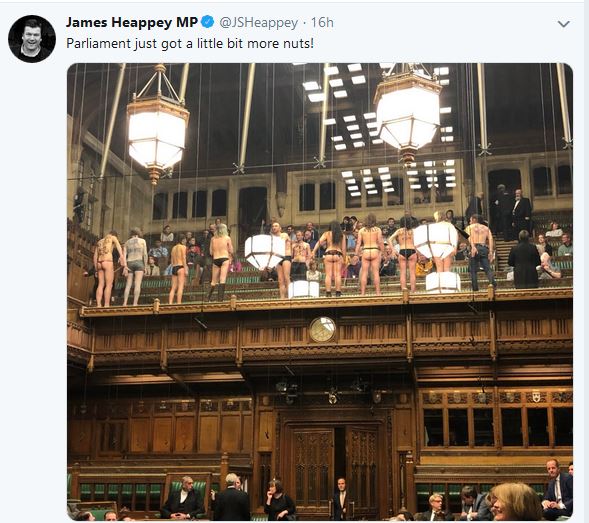 William Cooke, 36, former teacher and member of the Extinction Rebellion said: “Our politicians are bickering amongst themselves like spoilt children. They are refusing to compromise because they are more interested in their own needs than ours. They are wasting time that we do not have. The elephant in the room is climate change and is being ignored.”

Mark Øvland, 35, added: “None of us are going into this lightly. Taking your clothes off in Parliament isn’t a fun thing to do on a Monday afternoon. We’re afraid. It’s scary as hell.

“Yet something infinitely more frightening is impelling us to do this. In plain sight, before the eyes of the world, environmental breakdown is already causing untold devastation and suffering and its effects are snowballing. The world’s leading climate scientists tell us we’re heading fast towards irreversible tipping points, whilst distinguished thinkers and journalists speak of the very real threat of imminent societal breakdown as a result.”

It is unclear if all the activists are still in police custody this morning.

The action comes two weeks ahead of the International Rebellion, which the group claims will “shut down central London for days on end”.