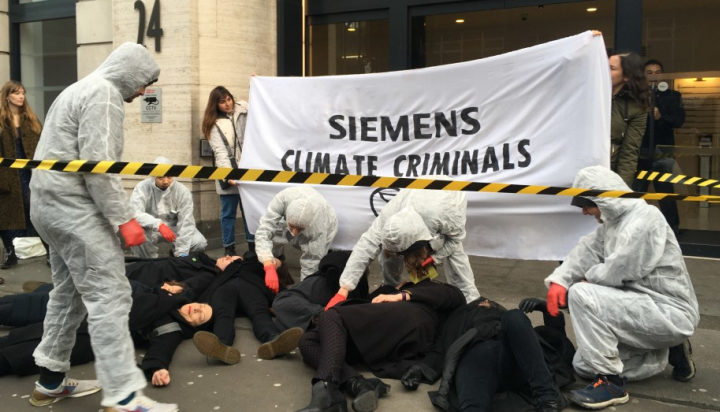 Extinction Rebellion campaigners are protesting outside Siemens’ London offices following the firm’s decision to continue providing railway signalling services to a coal mine in Australia.

The environmental activists have turned the area outside the office in Euston into a ‘crime scene’ with pretend ‘policemen’ standing over ‘victims’ lying on the ground – they say Siemens’ involvement with the Adani coal mine in Queensland makes the firm “climate criminals”.

The group claims the mine has the potential to produce enough coal to cause more than 705 million tonnes of carbon dioxide to be emitted each year and alleges 57 other companies have already withdrawn bids or refused to work on the mine.

Siemens initially signed the contract to provide railway signalling services in October last year and CEO Joe Kaesner confirmed the firm would be honouring the contract earlier this week, despite facing calls to withdraw from the deal.

Extinction Rebellion activists have also blockaded Shell’s regional headquarters in Aberdeen – early this morning they locked entrances closed and blocked the main gate with a boat.

They plan to carry out the action at the Tullos base “all day, with the aim of shutting the building down to disrupt business as usual”.

A Shell spokesperson said: “The heightened awareness of climate change that we have seen over recent months is a good thing.

“As a company, we agree that urgent action is needed. What will really accelerate change is effective policy, investment in technology innovation and deployment, and changing customer behaviour. As we move to a lower-carbon future, we are committed to playing our part, by addressing our own emissions and helping customers to reduce theirs – because we all have a role to play.”

Siemens AG CEO Joe Kaeser said: “We need to fulfil our contractual obligations. Also, we will establish an effective Sustainability Board to better manage environmental care in the future.”