The chief of E.ON UK said that “reality dawns” now for all in the energy sector as it closes its Kingsnorth coal power station to fall in line with EU […] 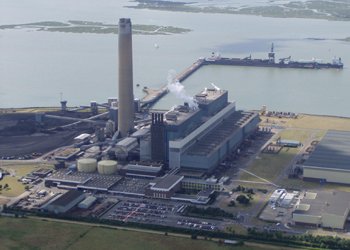 The chief of E.ON UK said that “reality dawns” now for all in the energy sector as it closes its Kingsnorth coal power station to fall in line with EU rules on emissions.

The power station stopped generating energy commercially at 3.10pm yesterday and will formally close by 31 March 2013 under the EU’s Large Combustion Plant Directive legislation (LCPD). This forced the plant along with others in the UK to close after generating for 20,000 hours from 1 January 2008.

The station would have been forced to close at the end of 2015 even if it had not generated these hours.

Tony Cocker, Chief Executive of the plant’s operator thanked the men and women who built and operated the station, adding that it brought home the challenge ahead for the sector to create a secure energy supply.

Mr Cocker said: “The reality that is dawning on us all now is that the end of commercial operations at Kingsnorth not only marks the end of an important chapter but highlights the very real and present need for the Government to deliver a framework that will provide a sustainable future for existing power stations and the new age of investment this country needs.”

Coal provided roughly 14% of the UK’s total energy demands this year, while generators created 1.8% more power from coal-fired stations in 2011 than in 2010 – although this was still a third below the recent peak level in 2006. Despite this coal plants are slowly being phased out to keep to the European Union’s – and the UK’s – emissions targets. This means a yawning gap of energy supply is on the horizon without more investment.

Mr Cocker said the future rests on secure policy: “Over the coming months more power stations will stop powering the UK and this provides a most striking example of the need for a clear, straightforward and customer-centric solution to be delivered by the Energy Bill. We need to get it right, and quickly, so we and other investors can build new plants with confidence,” he said.